Early on the breeze was very light and from NE, but it freshened slightly and shifted to west by lunchtime. Mainly sunny.

Heysham skear - low water 09:25
Great Crested Grebe 11
Little Egret 7
Curlew c40
South shore.
Pete struggled checking at range due to the strong heat haze, but managed:
Mediterranean gull 1 2nd calendar year on the mud out from Ocean Edge.
Later in the afternoon.
Raven chased off by the Power Station gulls
Rock Pipits
1 on Red Nab
The male near lighthouse still on guard duty
The female near the lighthouse is still taking food to the nest, but also to one young bird on the harbour wall, that succeeded in its first flight from the nest. 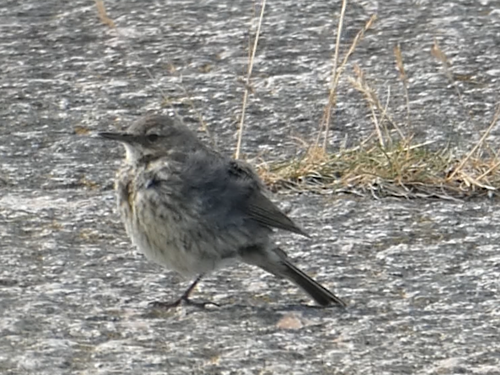 The youngster was spending some time sorting its feathers out. Hopefully, it will be joined by siblings.
Middleton Nature Reserve
Just a quick check of the main pond
Cetti's warbler singing from "no swimming" pond
Dragonflies:
Emperor 6
Black-Tailed Skimmer 4 including one ovipositoring female
Broad-bodid Chaser 3
Common Darter 1
This is a clip from this morning. It was quite calm, in these conditions on a spring tide, which comes in very quickly, you can both see and hear the tide coming in (this effect is lost when the dominant factor is the waves lapping in). What most people don't realise, is that the tide comes up below the sand/mud, not just over it. That's one of the reasons vehicles become stuck, they are driven out on firm mud, but when the tide comes in below, it liquifies the mud and the wheels sink in.
Anyway, on this clip you can see the water moving in over the mud, and hear the water coming up below the mud, as it is forcing the air out of the tubes dug by the invertebrates between the tides, in this case mainly blow lugworm, creating bubbles. (MD)
When the tide comes in less quickly, the water rising below the mud has time to vent the air from the worm tubes, before the water covers them, so no bubbles.
Posted by Pete Marsh at 20:13 No comments: