Light variable breeze and overcast for most of the day.

A visit to Middleton Nature Reserve, just after lunch found the car park empty. There were a few vehicles around on my completion of a circuit, but certainly the lowest number of visitors since travel to exercise was allowed.
Mute Swan 2 pairs with 3 and 5 chicks. 1 single bird on Tim Butler.
The visiting swans on the main pond, at one point totalled 22, but today they were down to 8. One theory about them, certainly fits the time line - Normally high numbers of swan on the Lune estuary supplement their diet with grain spilled when the grain cargo boats are unloaded at Glasson Dock. The cargo boats stopped when lockdown started, but have probably now resumed (MD),
Coot 4 - the pair on the "no swimming" pond have three chicks 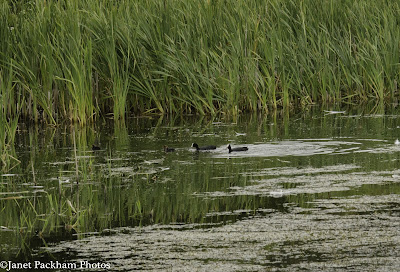 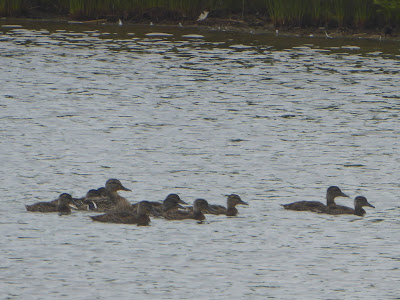 This female has done remarkably well with her chicks. She has been chased from pond to pond by the  resident  mute males. Yet she still has 10 of the original 12 chicks, and they are now quite well developed (she does look proud of herself).

House martin 1 - feeding over main pond
Stock Dove 1
Raven 1 - in dispute with the carrion crows in trees near waterworks.
All the warblers including Cetti's heard with the exception of Grasshopper warbler.

This Gannet was resting on Red Nab on Sunday - report and picture from Chris Thornton - thanks. 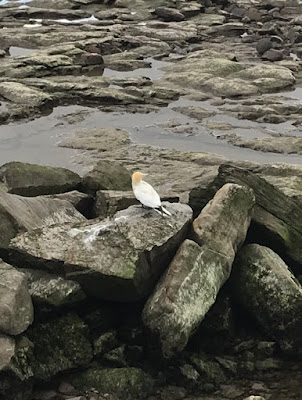 A freshly dead Gannet was found on the saltmarsh on Monday. It looks like this was its final resting place. The dead bird had no injuries so presumably succumbed to natural causes (MD)
Posted by Pete Marsh at 19:58 No comments: