No Wheatears on Ocean Edge foreshore this morning
Blackcap - there were two males together plus two singing near the small anemometer. Two singing is typical here but presumably the two together were new in.
Middleton Nature Reserve
I checked the western section in the morning (MD)
Blackcap were the most abundant singing warblers at least 6
Lesser Whitethroat 3 singing, which is more than I have been hearing recently.
Also Common Whitethroat, Chiffchaff and Willow Warbler, plus:
Cetti's warbler 2 - 1 singing from the slope to the west of the western marsh. This prompted the western marsh bird to sing too.
Grasshopper warbler 2. There was one singing quietly from the scrub on the ridge that forms the SW boundary with Ocean Edge. The other was where I left it last night on the hill in the western section between the small copse by the egress road and the golf course. But this morning it was more obliging!
I even managed a clip of it singing.........with the bird actually in the clip! This is at 09:40.
I returned after lunch to check the eastern side of the reserve.
Mute status unchanged.
Mallard 3 male 2 female
Cetti's warbler 1 - the central marsh bird was singing. Giving a total of 3 for the day
It was a bit quieter Warbler wise in the afternoon, no Grasshopper or Garden warbler heard, but all the other regulars present - a total of 9 species for the day.
The Long-Tailed Tits have fledged young.
At this point I was surrounded by at least five young plus several adults. It seemed a lot noisier than this clip suggests.
Insects:
It was quite warm in the sunshine and light NW breeze, things were emerging.
Butterflies included: Speckled Wood, Orange Tip, Green Veined White, Peacock and first records of the year for.
There were lots of Damselfly around, most too insipid for me to identify (MD).
There were some more easily identified, including several Common Blue.
This was a pleasant surprise, a Broad-bodied Chaser. Near the shallow scrapes created for this species at the west side of the western marsh. I believe it to be an immature female, but I've left the images in full resolution, in case anyone wants to open them to check the detail. 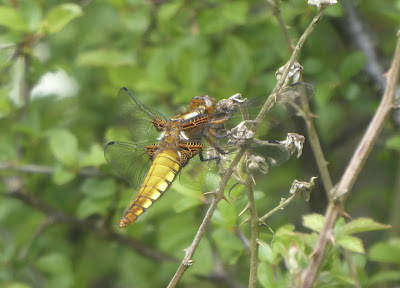 Otter status - there was another spraint marking a stone on the edge of the main pond.
Posted by Pete Marsh at 20:25 No comments: