South Shore
Pete checked the meds:
Mediterranean Gull - At least 26 outfalls/Red nab with birds departing to the Lune estuary at least as soon as I arrived at 1100 (8 3cy, 7 2cy, 11 ad) - no rings seen.
I had a walk along the shore and sea wall mid afternoon. I set off in full waterproofs in the pouring rain, and ended up sweating when the rain stopped and the sun came out (MD).
Goldfinch 7 feeding next to saltmarsh
Linnet 4 feeding next to saltmarsh plus 2 at Red Nab and 3 near lighthouse - these are the saltmarsh birds.
Rock Pipits 7 - one on foreshore. Four on Red Nab, I'm not sure what was going on, there was a lot of bickering and chasing going on, possibly a new male in the breeding birds territory. I suspect these two are males in conflict.
These are the other two and appear to be an adult (presumably the female) and a juvenile 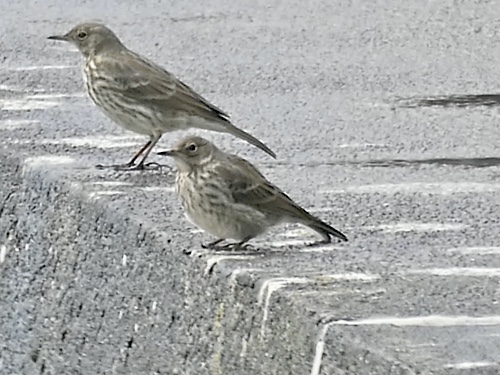 There were two taking food to the lighthouse nest again. This one has another sand eel. She is probably the breeding female. We have seen these abnormal feathers on the back of a female nesting here before, Pete suspected it was the result on many hours sat in the hole with her back in contact with the damp stone.
Curlew 61 north
Redshank 2
Shag 1 2nd calendar year resting on the rocks almost out of sight at the end of the wooden jetty. But even at this range its profile identifiable 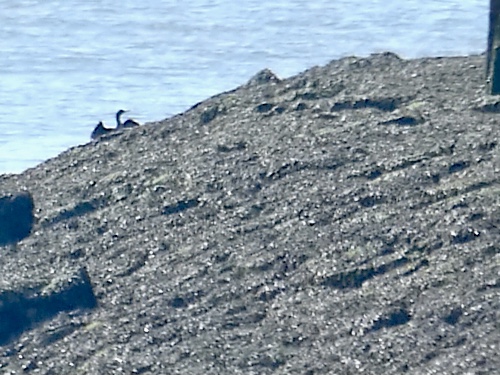 The Mediterranean gulls weren't in a rush to return from the estuary only 3 adults were seen this afternoon.
Heysham skear - low water 19:00 (MD)
Little Egret 8
Grey Heron 2
Great Crested grebe 2
Eider 1 female
Knot 2  together - no sign of summer plumage. Pete advises that they will likely be summering 2nd calendar year birds.
Curlew, many more than the  61 seen flying this way earlier. This clip gives a flavour of the activity.
The seed mussels are now too large for the Herring gulls to eat whole. This is a typical bed. 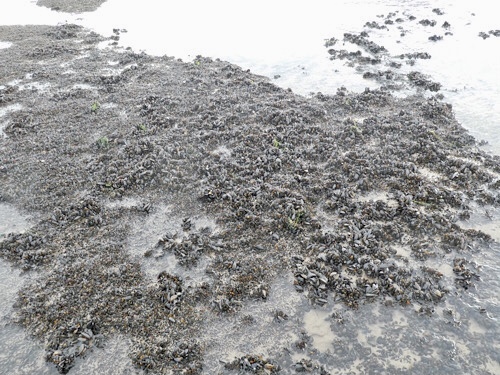 Finally, yesterday's "Sea Mouse" has now been correctly identified as a Sea Potato Echinocardium cordatum - thanks Angela (although I should have known, I am familiar with them! MD)
Posted by Pete Marsh at 21:46 No comments: