Green Sandpiper and a brassica

The breeze started from south before turning west, some cloud around, particularly in the morning but plenty of sunshine.

South shore mid morning
Rock Pipit 3 - 2 on Red Nab 1 near lighthouse (not the ringed bird)
Mediterranean gull 6 adult on the beach near wooden jetty.
Willow Warbler 2 at least in the scrub near the lighthouse
There were few "non resident" butterflies around the scrub.
Large White 1
Small White 6
Small Tortoiseshell 2
This is the brassica referred to in the title, Sea Cabbage. Unlike most plants prefixed "Sea", this actually is a cabbage or at least of the cabbage (brassica) family.
It has taken advantage of a long storm free spell, to grow in a very precarious spot on the foreshore, hopefully it is now rooted sufficiently well to withstand moderate storms. It is well within the splash zone for any high water storm. The location highlighted below. 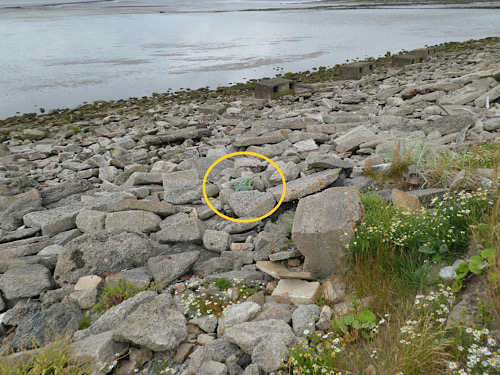 If you manage to locate this and walk another 50m towards Red Nab, you should come across the Sea Holly, which is, of course, not a holly.
It's interesting that they are both a similar shade of blue/green, perhaps related to them both being high salt tolerating (the sunflower that tried its best on the saltmarsh didn't get through the first spring tide!).
Middleton Nature Reserve early afternoon
Mallard 13
Gadwall 1 adult 3 young
Little Grebe 1 adult
Green Sandpiper 1 calling from western marsh. A bird was heard calling on 22/7 and assumed to be this species, so it looks to be hanging around.
House Martin 3
Swallow several
11 species of butterfly seen, most quite numerous.
Red Admiral 1
Peacock 1
Comma 1
Common Blue
Gatekeeper (most numerous)
Meadow Brown
Speckled Wood
Large Skipper
Small Tortoiseshell 2
Small White
Large White 1
Six species of Dragonfly:
Emperor
Brown Hawker
Migrant Hawker 3 - the only one I saw stationary, again looked fresh, in that its characteristic "nail" below the thorax had not yet turned yellow (MD)
Black-Tailed Skimmer 5
Common Darter - just 1
Broad-Bodied Chaser 1 male - this seemed odd, it appeared to be ovipositoring. But if you watch in slow motion you can see that most of the dips end just above the water surface (you can select what speed you wish the clip to play by selecting full screen for the clip, then clicking on the gear icon).
Finally, the mute pair with their young were back on the main pond. The aggressive male had chased a third bird to the top of the high bank on the east side and set about it. I thought  he was going to kill the weaker bird, so I stopped filming as started moving round to break them up (ultimately futile I know, but visitors were getting upset). Fortunately, just after this clip he let the bird escape down the slope, when he went down too the weaker bird went back to the top and the aggressive male seemed satisfied that it had been suitably chastened and let it be. Even so, I would advise the more tender hearted readers not to play this clip.
Posted by Pete Marsh at 20:53 No comments: