Still plenty of interest over the sea.

Very light variable breeze again, from NE to west and back to NE again. Very warm in the almost constant sunshine.

Middleton Nature Reserve
Ringing report from John:
Another very quiet ringing morning. Although three nets set before 6.30am, no new birds caught in the first two hours. Just two retrap warblers a Willow and a Sedge.
The only other birds caught later were seven Lesser Redpolls, in two small groups.
Jean and Pete conducted a seawatch from the North wall, and the resulting tally looks impressive, but things weren't as hectic as yesterday.
Report from Pete:
Early morning seawatch heysham north wall:
52 Sandwich Tern
8 Red Throated diver - Nick had more rtd than us (10 in and 3 out)
1 Arctic Skua
32 Whimbrel
175 Pinkfeet
1 distant Osprey
141 Common Scoter
3 Gannet
9 Guillemot
2 Razorbill
2 Razorbill/Guillemot
5 Arctic Tern - The arctic terns we’re going up the Lune flightline this am - Ian Hartley had 60 odd in a short high tide seawatch from Cockersands.
5 Manx Shearwater
13 Swallow and 1 House Martin over sea
Nick Godden also a lot of Bar-Tailed Godwit (130 north plus 25 on the shore) which may have been feeding north of Heysham Head - they are on the move nationally in big numbers and strong easterlies seem to be diverting them from the usual English Channel route
Also:
1 Chiffchaff,
1 Wheatear,
1 Displaying Rock Pipit along wall
Redpoll and Linnet overhead.
Pete also checked Red Nab and located 2 x 2nd calendar year Mediterranean gull 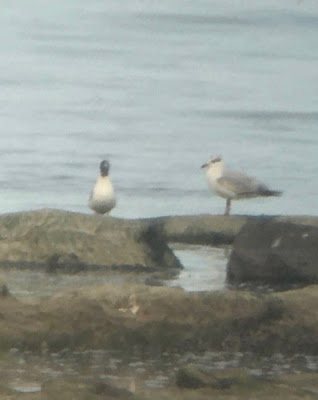 Grey Plover, there has been a couple hanging around the saltmarsh all winter, they are now well on the way to summer plumage. 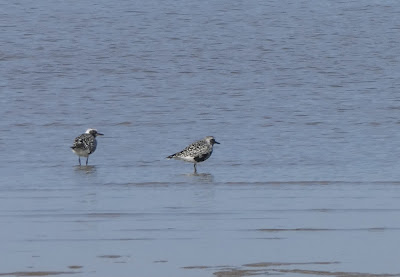 Heysham skear - low water 17:00
Red-breasted Merganser 6
Eider 93 counted close in, there would have been more
Whimbrel 2
Teal 4 (2 male and 2 female preening before flying north)
Dark-bellied Brent goose - it was on the north side of the skear again 16:15. But further out, the same distance from shore as Conger rock (the largest rock of the skear located on the south side). It was still visible as I was making my way back at 17:00. No reason why it won't be there again tomorrow, but higher tides mean it will become increasingly difficult from the sea wall.
Posted by Pete Marsh at 20:11 No comments: