Rock pipits - lighthouse pair still feeding young in nest - it is a difficult first flight from the nest hole in the vertical wall directly over the sea. Only one bird made it from first brood last year. Hopefully, they will be as well fledged as possible this year.

Middleton Nature Reserve
Mute Swan - 23 on the main pond, plus the female on the nest. Pair with 4 young on "no swimming" pond.
Coot 3
Moorhen - strangely none seen
Warblers 7 of the known breeding birds singing,  the missing two were Grasshopper and Cetti's.
Actual grasshoppers are now chirruping.

Dragonflies
Broad-bodied Chaser - mature male patroling 5 of the 6 new small scrapes on west side of western marsh in the afternoon. Plus one seen on main pond in morning.
Four-spotted Chaser minimum 4
Black-tailed Skimmer 1 (first record this year) 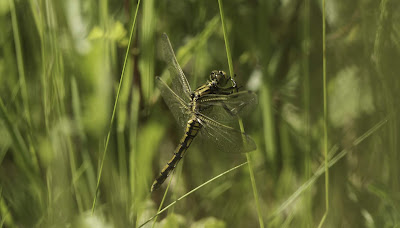 This Common Bluetail Damselfly, also photographed by Janet, is quite interesting. The pink thorax indicates that it is an immature female of the C-Type. I've no idea how common this type is here, but I've not noticed one before (MD). 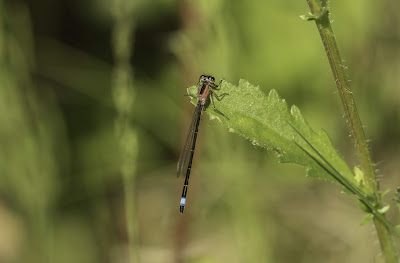