Sea at various times from 0800 to IOM ferry arrival 1210
Gannet - 12 out - all early on
Red-breasted Merganser - one out
Kittiwake - just the one Ad seen early on i.e. none behind ferry
Red-throated Diver - partial sp adult out
Pintail - flock of 6 out
Sandwich Tern - juvenile briefly off end of outfalls early on, then out
Arctic Tern - either two 1CY briefly or the first bird briefly dragged back in by the ferry - perhaps unusually would not remain on outfalls
Common Tern - adult arrived mid morning and remained on outfalls 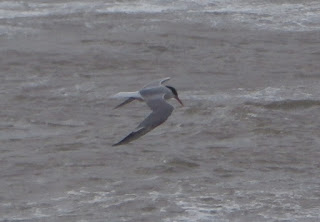