Dragonfly activity started early with first Common Darter at 08:10. Also, Brown Hawker and Emperor. An increase in Migrant Hawker numbers was reported later in the day.

Lighthouse area checked twice to check for insects coming in. Tide out both times (MD)
11:00 - unfortunately the breeze had shifted to north by this time. No sign of any current  or earlier movement.
19:00 wind now NE. Still no sign of any insects coming in off the sea.
Rock Pipit 1
Wheatear - at least 2 (2 seen both visits but none when Kevin checked in between)

Some pictures from Kevin:

From the overnight trap - a rather lovely Bordered Beauty.

Just an aside from this morning's visit to Middleton (MD)
Grey squirrels are regularly seen here, you normally get a glimpse of one feeding in the perimeter trees. So this one was unusual, to say the least!
It approached me along the road and I had to "shoo" it away, but it wasn't for going. 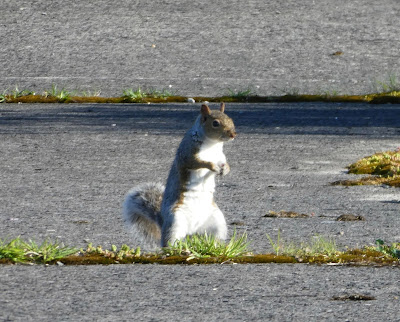 I made my excuses, and left.