The luck comes to an end

It had to happen.  Couldn't make a lot of sense yesterday of the variable forecasts for this morning until an innocent looking trough was picked up over the Atlantic on the Magic Seaweed synoptic chart and the chance of this lot heading our way and 'developing' started to climb to 80-90%: 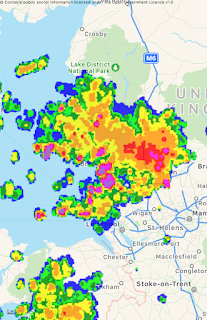 Situation at 7ish.  We have been very lucky this month with medium range forecasts indicating gloom and doom and the rain then either falling in the night or not at all and strong winds melting away.  Not so fortunate 'down south', it seems, so the decent numbers of birds we have ringed this month may have/have had a mist-net-free further migration. Unusually, I'm not aware of any birds ringed elsewhere in our nets this month.

Totals of newly ringed birds for the month of August from Middleton/Heysham.  Note that we have been two ringers short and many Middleton efforts have been just a single ringer with 2 or 3 18m nets and similarly at Heysham NR, just the line of three 18m by the office (including feeder):

Difficult to make any meaningful comments on a single month but Whitethroat and Willow Warbler above average for here, Reed Warbler below average all summer, Wren and Long-tailed Tit above average for August, Grey Wagtail in good numbers in the last few days of the month,  but never was so much racket played with such little effect for Tree Pipit.  Just one was caught and ZERO heard on vis mig!   Craig Bell indicated that the good numbers he was catching above Rossendale were due to his site already being at 1000ft and even there the birds were migrating very high.  Peter Alker is also at  a higher site at Billinge. So maybe we have been fortunate in previous years to get a few low-flying ones