Calm and sunny initially after another cold night. Then a slight southerly air movement brought in the clouds. The breeze freshened slightly and moved to west.
Middleton Nature Reserve
A quick check of the main ponds confirmed there are still 38 Gadwall, although no sign of the Wigeon today.
Red Nab and saltmarsh area (MD)
Wigeon c120 on Red Nab
Shelduck 143 most out from the saltmarsh
Rock Pipit 1 on foreshore
The plan was to check the mud out from the saltmarsh for waders on the incoming tide, unfortunately, someone else also had plans for this area. Someone exercising a horse quickly cleared most of the birds.
Curlew 48
Lapwing 20
Knot c100
Grey Plover 12
Redshank 20
Oystercatcher c30
Dunlin 8
Ringed Plover 41
Both the above were feeding together and appeared to be finding plenty to eat.
I checked the area where they were feeding after the horse had flushed them. I couldn't see anything to eat, certainly nothing moving. I can only think they were finding tiny molluscs, although the way they were feeding it did look like they were "catching" their food. Presumably the molluscs quickly retreat under the mud and my heavy tread gave them ample warning to get out of sight.
Greenfinch just one near Red Nab, none around the saltmarsh. It looks as though the mustard bonanza is over, although all the plants still have some pods.
Great White Egret 2 together 13:30. I was surrounded by trees near the small anemometer when they flew directly over me to the west. I didn't see them coming so had very little time to get my camera out, so only managed this hasty low magnification shot of one of them. 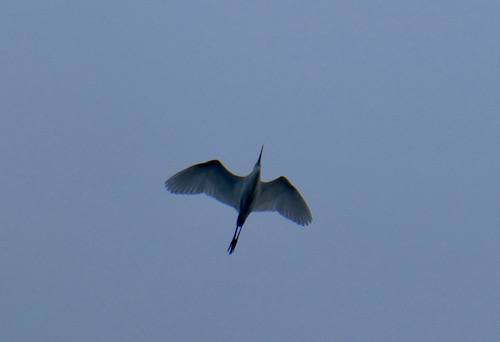 By the time I'd got to a clearing, they were quite a distance away and had turned north towards Heysham Nature Reserve. Again I only managed a soft focus shot of one of them, but it does show their impressive wing span.
Pale-bellied Brent Goose 3 11:30 - seen from promenade below Heysham Village - seen by a visiting birder, Phil Byle via Pete
Out of recording area - just north of the Stone Jetty.
Purple Sandpiper 2 at Bare pool, where Seaborn Road meets the promenade - ref Jeff Butcher
Posted by Pete Marsh at 22:00 No comments: