From elusive to predictable

Shag - the short days seem to be forcing it into a predictable pattern, at least during spring tides. Its preferred feeding location seems to be the low water channels on Heysham skeer, but these are seldom exposed during daylight at this time of year. They were this morning, and by 08:30 it was resting on a small island west of the largest rock in SE of skeer, presumably digesting breakfast (MD) 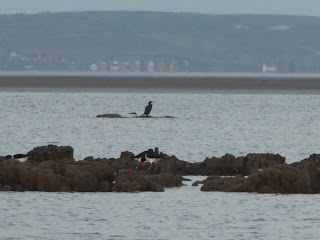 Not much of a picture, but shows location.

The tide may just be low enough again in the morning. If so, the Shag should be feeding or resting between about 08:30 and 09:00. If the tide is not low enough it will probably feed near Heysham Head and/or the north wall around high water.

Carrion crow, there were 34 waiting for the tide to ebb far enough to reach the skeer islands to feed. They then fed in ones and twos, on the exposed sections of honeycomb worms beds, before leaving, again in ones and twos in all directions east. The new honeycomb worm beds must be providing some new opportunity to feed. Two to four birds feeding here is typical. 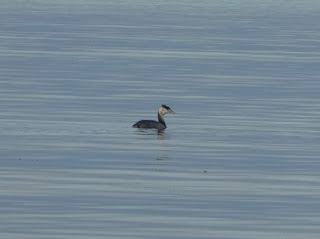