The light wind was from the south all day, drifting round to SE by evening. Mainly overcast, but warm.

A morning check by Pete:
Manx Shearwater 2 distant
Mediterranean gull 2 x 2nd calendar year birds on early tide roost Ocean Edge. Also
Curlew 375
Middleton Nature Reserve (MD)
First visit 09:00 -10:00
Mute status unchanged
Mallard the 10 immature birds on the main pond
Gadwall 1 female with a single chick, but she does look proud of it!
Little grebe 1 adult plus 2 independent immature birds on "no swimming" pond. These are the two immature birds, nothing striking on these clips, except that they both include a burst of song from a Cetti's warbler. This one the Cetti's is right at the end as it dives.
This one is preening, the Cetti's song is at the very beginning of the clip.
Water Rail 1 calling from fence pond
The prime objective of this morning's visit was to see if I could manage 10 warblers. But, "no swimming" pond Cetti's excepting, the warblers were surprisingly quiet. I only managed 7 species and one of those was seen only. Cetti's warbler, Willow warbler, Chiffchaff, Blackcap, Common Whitethroat, Reed warbler and Sedge warbler (seen only).
There were some half hearted partial bursts from where I'd heard yesterday's Garden warbler, but not enough to identify species (by the way I've added an audio clip of yesterday's singing bird to yesterday's post if you want to check it out).

I went back in the late afternoon, only planning to check the main pond for dragonflies, but despite it being 24C only damselflies were active, apart from:
Beautiful Demoiselle 1 male - SW corner of the main pond 16:07. This is only the second record for the recording area, the previous record was by Pete 04/08/2003, again on the main pond.
I flushed it when I went through the gap in the hedge to the SW corner. It flew towards the higher bushes and disappeared. I managed just one more sighting, again just in flight. Kevin arrived and we searched the whole pond area thoroughly, but no sign. I suspect it ended up resting in the high bushes in the SW corner, might be worth a look when it warms up in the morning (see location shots below).
I tried to get some record shots, and to some extent I managed. Nothing clear, but nothing else, that I know of, that it could be. Plus initially it was only a couple of metres away with clear view of its totally dark wings.
I normally pre compress my images, but they are already vague enough. You will have to open these to see them more clearly. 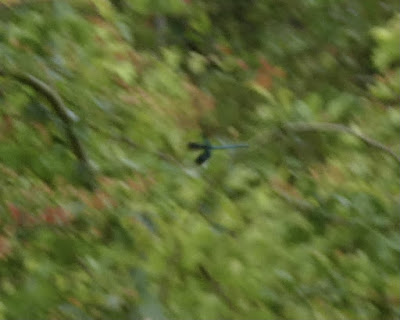 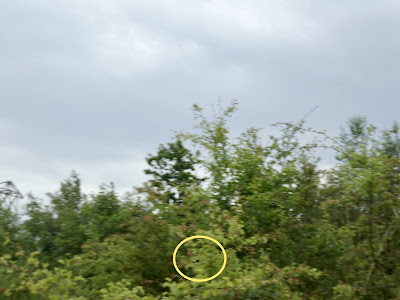 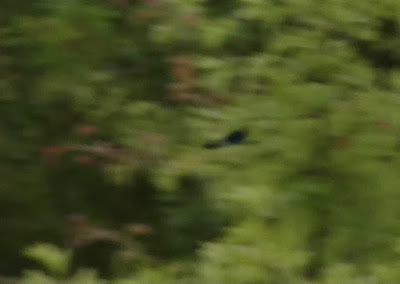