A similar weather pattern, almost no air movement early on then breeze from the west freshening during the day. Some cloud but mainly sunny.

Heysham skear - low water 12:00 (MD)
Great Crested Grebe 5
Sandwich Tern at leat one heard, probably fishing in the far channel
Little Egret 3
Curlew c50
Turnstone 4 - 3 in summer plumage, the fourth only seen head on but possibly a first summer bird.
All four were in association, but this one was separate from the other three.
In these conditions Turnstone trust their camouflage. I only spotted them as the one above was directly in line with where I was walking and it moved a couple of metres, before it, and the three in the clip below, just froze. I took this clip just to show that they were perfectly still. If you took your eye off them they were surprisingly difficult to relocate, even though I knew where they were, and I was only 3m away. They didn't move at all and I walked off without disturbing them.
Middleton Nature Reserve
Kingfisher 1 - just a glimpse of one on the "no swimming" pond, this is a species that doesn't normally show till autumn.
The singing warblers were much less vocal than of late but I eventually heard:
Centi's (1), Common Whitethroat, Lesser Whitethroat (2), Chiffchaff, Willow Warbler, Blackcap and Sedge Warbler (1). Reed warbler seen only.
The Moorhen pair on the main pond have at least two chicks in a second brood. A remaining juvenile from the first brood can be seen in the foreground.
This is just an update on the condition of the skear. The picture below was what I posted on 15/06/21 to show that the mussel cover was complete, albeit sat upon previous Honeycomb worm beds. 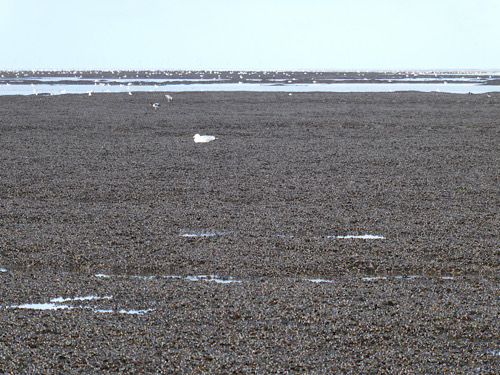 On 22/06/21 I advised people to keep away from the middle of the mid skear as it was like walking on very thick "Rhubarb crumble" as the supporting structure of the old Honeycomb worm reefs degraded.
The picture below is of the same area today. 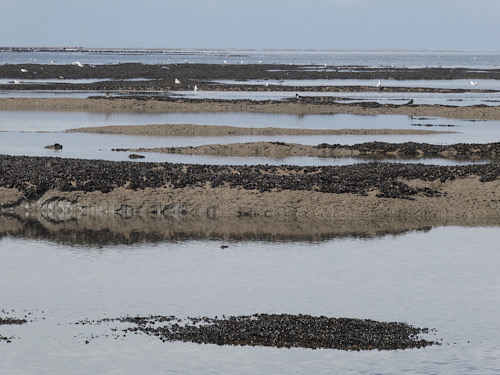 The power of the ebbing spring tides we've just had has cut channels through the beds, sweeping away much of the soft mud below the mussels. You can see my Rhubarb crumble analogy in section now. But this is good for the mussels, although ebbing spring tide currents are formidable, they were during calm conditions. So, fortunately, although a lot of mussels will have been swept away with the mud many ended up on the skear bottom between the remaining beds. This shot demonstrates that. 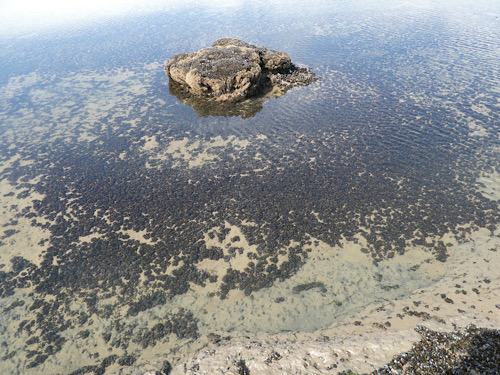 These mussels will now anchor to the skear and themselves, and although they will raise higher, through a process called layering, that is normal and should withstand all but the severest of storms.
This is the western section of the mid skear where the effects of the ebbing tides are most powerful. The eastern side, the mussels still sit on the old honeycomb beds and are still difficult to walk over.
We are now moving to a week of neap tides, so the above area will not be exposed again for a while. Another thing to note for the following week is that the height of high water will be insufficient to cover the mud in front of Ocean Edge saltmarsh. So if anyone is planning to check the high water gull roosts, there could be one there as wall as one on Red Nab.
Posted by Pete Marsh at 20:32 No comments: