Heysham Obs
The 3CY Med Gull saga took a positive step today with the reading of the last two numbers (91) and two lines of rather small vertical writing between the end numbers and the butt of the ring = 1000 Brussels. Thanks Renaud. 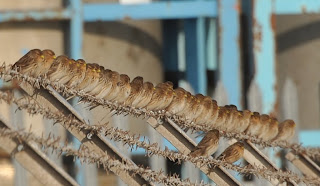