The two wintering Pale-bellied Brent Geese (note also a third bird south towards Potts Corner on at least two dates) have been difficult to locate.  Malcolm has worked out a pattern: 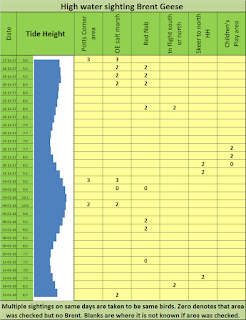 It is clear that the lowest high tide resulting in a sighting on south side was 8.4m.
The northern side is less well reported, but 3 of the 5 records were for tides less than 8.0m. The "anomaly" being the record on skeer just to north of HH on 31/12 on 9.05m tide. However I suspect this would have been quite a while before high water, as this skeer is covered early.
In summary: it appears that the north side is favoured, until tides are sufficiently high to force the birds to the south, for the duration of high water at least.