The wind started of SSE and shifted to SSW by the afternoon. Plenty of sunshine, but some heavy showers.
Seawatch report compiled by Jean:

Red-throated Diver - 4 out in twos

Manx Shearwater - 1 seen later on in the morning

Swift - 2 seen later in the morning

Heysham Head mid morning (MD)
At 08:30 The foreshore rocks between Half Moon Bay and the high cliffs (below the old go-cart track) felt like it was boiling with birds. Sparked by the arrival of:
Wheatear 6
And possibly an influx of Rock Pipits (a total of 5 here plus another at the northern point of the Head). All the resident breeding birds were defending their territories including Linnet, Wren, Starling, Pied Wagtail, Starling, House Sparrow and at least two Rock Pipit territories.
This male Linnet was trying to out sing a Wren - no chance (sorry if the swaying rock gives you motion sickness! - I was precariously balanced).
On my return at 09:15, after checking the northern section, everything had settled down. The wheatears had stopped feeding and were just resting on the cliff faces and the breeding birds had gone back to their normal routine. Looking down from the cliff tops now, I spotted a
Whinchat 1 female
The gorse above the cliffs was also busy with birds, mainly Linnet but also Whitethroat.
South shore late morning
Pink-Footed goose 1 resting on Red Nab
Whimbrel 2 on Red Nab
Wheatear 3 possibly 5 (3 on foreshore, 2 on Red Nab could have been same)
Rock Pipits 6 (that makes at least 12 birds seen in the recording area this morning) - 1 on Red Nab, 4 in dispute near the waterfall, watched on by the ringed male near the lighthouse.
Yesterday, Lancaster wildlife and nature group reported Common Whitethroats and a Sedge warbler in the scrub near the lighthouse. Today there was one Common Whitethroat and two Willow warbler. This is one of today's Willow warbler
This is a regular catchment area for migrants.
Heysham Nature Reserve
A couple of butterfly pictures from Janet

Middleton Nature Reserve mid afternoon
Warblers:
8 species heard, but only one Lesser Whitethroat and no Grasshopper or Garden warblers.
Cetti's warbler, just the "no swimming" pond male heard.
Mute 2 adult plus 1 immature (only discernible by dull bill now) on main pond. Plus two nesting pairs
Coot 4
Moorhen 6
Mallard 3 male plus 2 female, one with 10 chicks
Gadwall 1 male
Little grebe 2 adult plus 2 chicks on Tim Butler pond, plus this individual, today on the "no swimming" pond. 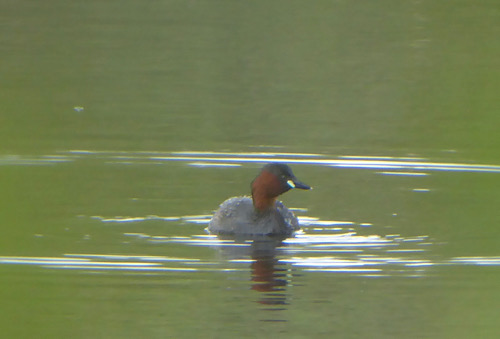 Unfortunately, just as it came into clear view, a visitor came to feed the mute and the grebe disappeared
Posted by Pete Marsh at 20:24 No comments: