Good coverage, and a decent selection

Very light breeze, just about from the west. Largely overcast with some light drizzle.

There were very few birds around and the total was made up partly by birds attracted to the recently installed feeder.  A flock of 22 Long tailed Tits was roaming the reserve but none was caught.

There were a number of blackbirds around on the reserve and ones and twos of thrushes flying generally eastwards.

Two large flocks of around 700 each of Pink footed Geese flew northwards.  One at 07.30 over the reserve and the other at 08.00 was far to the east.

Ducks on "no swimming" pond

Eider 91 around skeer channels plus 52 nearer the Stone Jetty

Knot c1,000 on skeer, later 1,300 on heliport wall, including 1 Dutch ringed bird which avoided being read.

Meadow Pipits 2 as above

Sandwich Tern 1 juvenile - this bird is very hit and miss. Possibly, as Kevin saw it take two small fish from No.2 outflow in as many minutes, it quickly finds its food, then roosts for a while. It was also seen flying along the south wall as far as the wooden jetty before returning.

These excellent pictures from Kevin 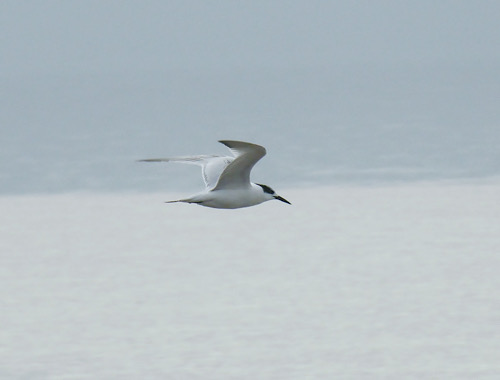