Heysham Obs
Today was a simple case of how you cannot mix coverage of 'high blue sky vis' with trying to do a multitude of other things, especially at a lowland site with quite a bit of background noise.  Basically my vis coverage was awful with an element of self-delusion that multi-tasking was possible in these conditions.  For example, the number of (albeit high flying and 'purposeful') Swallows passing unrecorded was in the region of 99% judging by results from people who were really concentrating on vis at nearby sites (and the number attracted by a short spell of tape playing!).  They were still moving in the 'hundreds', along with Meadow Pipit, over Thrushgill in the late evening.   Tomorrow looks tasty for something easternish - a day for grilling coastal trees and the like with a significant influx of Yellow-brows on the east coast and northern isles today (e.g. 24+ on Foula)  - Monday possibly if the rain is later than forecast.  Date-wise, the first record of Yellow-brow here involved three birds on 22nd September 1985 in minimal pre-work coverage, albeit in rather special weather conditions which also produced multiple Red-breasted Flycatcher at nearby Walney (narrow band of 'grounding' drizzle within an easterly airflow round a high pressure).  Wanted:  a decent birder used to bush searching for the next two mornings!  Sites which could do with some coverage include the gardens at Sunderland, Potts corner woodland, Heysham Head, Heysham Smithy Lane, North harbour wall mound, Jenny Brown's Point and basically anywhere along the paths at Leighton Moss providing you dont cut yourself off from the migrant activity by spending time in a hide.

Vis mig dawn to about 0930hrs
The original unedited comment was: "A bit tricky with the blue sky and multitasking" - this was before the extent of the movements at other nearby sites was known!
Meadow Pipit - c350 SE - "probable underestimate"
Grey Wagtail - 7 SE (probably accurate c/f tape playing)
Goldfinch - 20 S
Chaffinch - 38 SW
Swallow - 13 SE (more at Middleton but chronically underestimated)
Siskin - flock of 3 W
Sparrowhawk - high-flying male south
surprised no corvid passage
Reed Bunting - none over HNR but 7 migrants ringed at Middleton

Grounded
Mostly a net loss from yesterday, especially Goldcrest
Goldcrest - no more than 5 around
Chiffchaff - 4 HNR, 2 Middleton
Sedge Warbler - lightweight juv trapped first thing
Robin - not many with just 5 new ones ringed at Midd/Hey and not much ticking and chasing
no 'sylvia' warblers seen/heard 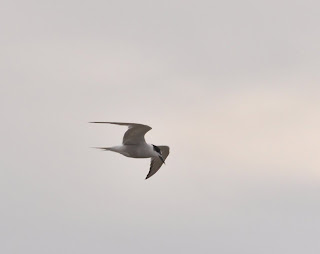 Thanks Janet
Little Gull - ad
Little Egret - one in the saltmarsh creek in the morning (scarce this year!) 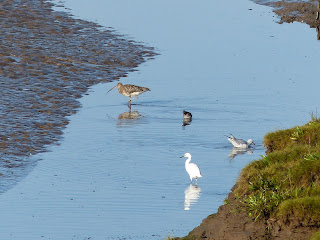 Thanks to Sandra and John

Waders - the numbers off Ocean Edge on the afternoon tide were unbelievable - almost like someone had flattened a wood ants nest with Knot & "presumed Dunlin" scurrying all over the place interpersed with more 'stately' Grey Plover, Bar-tailed Godwit, Curlew and Oystercatcher.  Light was awful and counting/identification of small stuff (good job there were no obvious 'peeps'!) very difficult so I just sat back and enjoyed the spectacle

Butterflies
Red Admiral office buddliea for third day & one in the nature park, c6 Small Tortoiseshell, Comma
A circuit of the reserve mid-afternoon just added Speckled Wood but the main feature was not a single dragonfly seen! 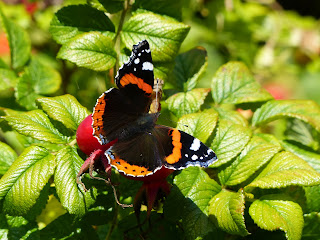 Red Admiral nature park this afternoon - one of at least two around in what has been a scarce year for this migrant.  Thanks to Sandra and John