The SW winds eased overnight, by afternoon is was little more than a SSW breeze.

Please note the 2021 Annual report is now available - see side bar
Heysham skear - low water 12:10
Pale-bellied Brent goose  40 - again spread out around the skear feeding on patches of broken weed from the storms. Most along the southern edge of the skear but 8 along the northern edge.
Eider c360 - there were at least 190 close in to the skear plus a distant feeding group of at least 170.
Great Crested Grebe 1
Red-breasted Merganser 2 male
A better variety of waders today. Oystercatcher the most numerous, plus Knot (c200), Redshank, Turnstone, Curlew and Dunlin
Dog walk path.
Siskin 3 - ref Kevin
South shore late afternoon
This was on the rising tide, but we are back to neap tides now and they don't raise far!
Pale-bellied Brent goose 30  (almost certainly some of this morning's birds). They arrived from the north side at 16:30. They often do not come to Red Nab on this height tide, but these arrived early, before the tide had reached the rocks. It was notable that they landed in the fresh water stream and began drinking. This suggests two things:
1. They had come directly from feeding on broken weed in sea water (as opposed to feeding on the gutweed in the freshwater run offs).
2. The gutweed on Red Nab is now sufficiently lush to allow reasonably easy feeding early in the tide (MD)
Wigeon c150 were waiting in channel before going to Red Nab, almost certainly joined by others later
Shelduck 14
Rock Pipit 3
Shag 1 juvenile feeding at the waterfall.
This is a nice sequence to demonstrate both its size compared to the gulls and its unique diving style. 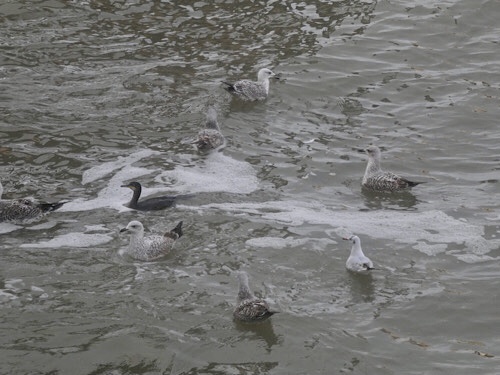 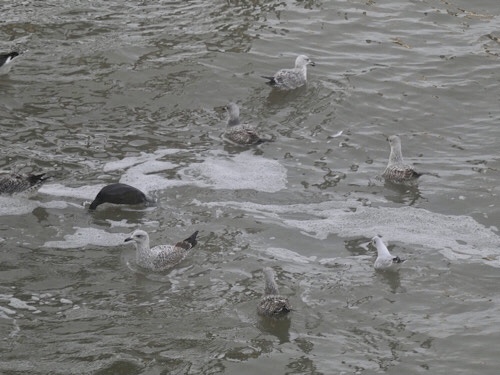 Don't watch the Shag in this clip, watch the two young Lesser Black-Backed gulls top left. They are having a tug of war over a small fish.

Little Gull 1 first winter - yesterday I suggested that they may be gone by today, but Pete advises that it's typical for first winter birds to hang on a day or two after a blow. So just a chance tomorrow?
There was no sign of it when I walked out but it was showing well when I walked back at 16:00.
Finally, this was a puzzle. I'm not normally unsure about fish, but this one confused me (MD). This cormorant catches an "eel" in No.2 outflow. Only a short clip I'm afraid.
But it is much too early for eels. Perhaps the warmer Power Station water could explain it, but eels this size are immature and should be both yellow in colour and, at the moment, be hibernating under the mud in fresh or brackish water. I watched the above clip frame by frame and blown up. I decided that not only was the fish not yellow, its back appeared to be covered in dark spots. The only thing I can think of that fits that description is a Lamprey. I've never seen one, and I've never seen signs of them feeding on other fish (they suck blood like a leech). I spoke to Linda Renshaw regarding local populations, she advises that River Lampreys are reasonably common in our local rivers. I've looked into River Lampreys and the size is right, and this is the time of year to expect them to move into rivers to spawn.
This is a blown up still from the above clip.
Posted by Pete Marsh at 21:02 No comments: