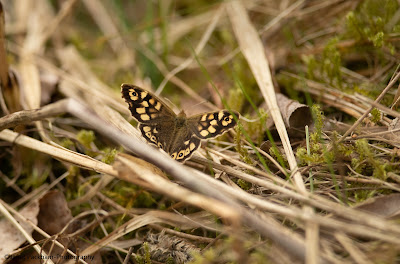 Kevin Singleton also visited today, his pictures may explain what happened to the other three ducklings.
South Shore (MD, KE)
Wheatear 8 (6 on foreshore plus 2 near lighthouse)
Linnet 2 near lighthouse, they bred here last year.
Rock Pipit 4 (1 on Red Nab, breeding pair plus what appeared to be the one legged bird near lighthouse)
Kevin Eaves took this shot of one of the pair.
Nature Park
Chiffchaff 2 singing
Blackcap 3 singing
Heysham skear - low water 17:40 (MD)
Eider 150
Red-breasted Merganser 10
Great Crested Grebe 1
Little Egret 11
Sandwich Tern 2 started feeding at low water, the sea was flat calm, unfortunately the sky was white, making them difficult to spot, best against a dark background, this is the Power Station.
I managed a clip of one feeding dive, this time unsuccessful.
Eventually they both must have caught as they settled on a small island for a rest. 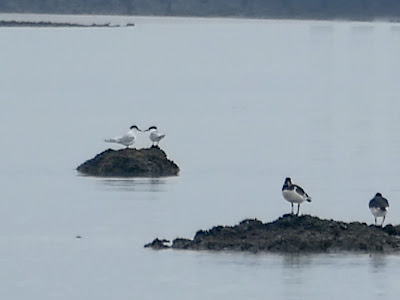