The Little gulls had been driven inshore today. By 10:30 they were making their way out past the south wall lighthouse along the wall towards Ocean Edge.

An absolute minimum of 8 including 1 x 1st winter and 1 x 2nd winter.
They were trying to feed just under the wall. This picture shows position and the conditions, there are two Litle gulls  in this frame, centre just out from the wall. 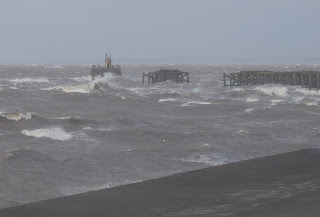 Later 4 birds, including the 1st winter, were resting on the grass area on Ocean Edge, until the sea spray became too intensive and drove them off. 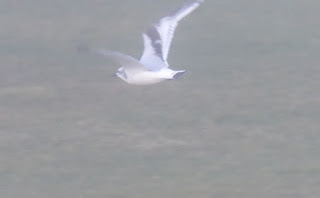 This picture is not "soft focus" the blurriness is the result of looking through a horizontal salt water shower!

Rock pipits. 1 near waterfall and 1 on saltmarsh.