Light variable winds and the constant threat of rain that rarely materialised.

The ringing session this morning at Middleton began early, at 05.45 with the expectation of rain by 10.00 - the rain never came. After a quiet start a reasonable total of 26 of birds was caught, including a nice treat in the from of the first Grey Wagtails. Three of this species were trapped and colour ringed as part of our on-going project (see scheme details on side bar, right)

Jean managed to photograph this Kelvin-Helmholtz cloud (no, I hadn't heard of them before either, but I found it interesting (MD)) 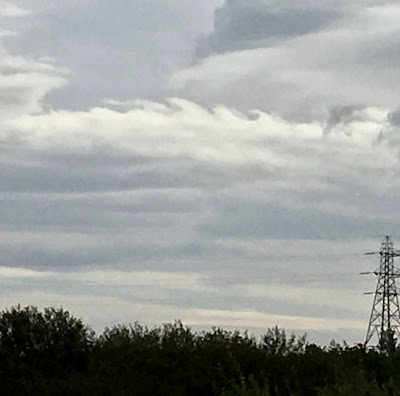 A Kelvin-Helmholtz cloud looks like waves. I was a bit slow to take the picture, so it had started losing its shape. It indicates a turbulent flow which causes ripples of air within an otherwise stable flow of air.

South shore
Early morning (PM)
Arctic Tern 1 juvenile on No.2 outflow. Looking restless, with at least one foray to the shipping lane and back.

Early afternoon (MD)
No sign of the Arctic tern
Wheatear 1
Rock Pipit 2 + 1 + 1
Mediterranean gulls:
5 juvenile feeding on No.2 outflow
3 adult on beach next to the outflow
36 including 1 juvenile feeding on the sand mason worms on beach next to jetty.
But the Arctic Tern hadn't moved on ( unless a new bird). Kevin photographed it on No.2 outflow later in the afternoon. Presumably the prospect of easy pickings is currently outweighing the instinct to move on. 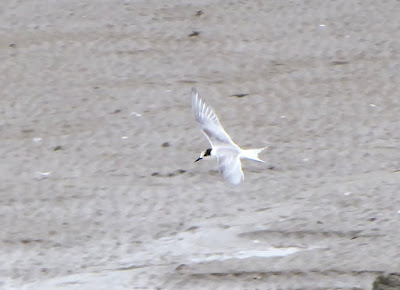 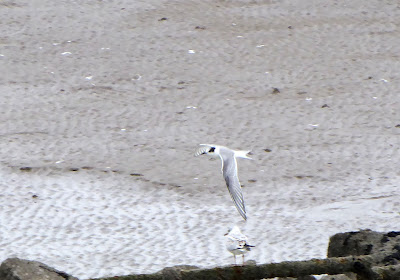 North shore (JP)
Rock Pipits 3 including at least one juvenile bird, below the Heysham Head cliffs. That takes the minimum number in the observatory area today to seven.

This is the remains of an Heart Urchin - commonly known as a "Sea Potato". 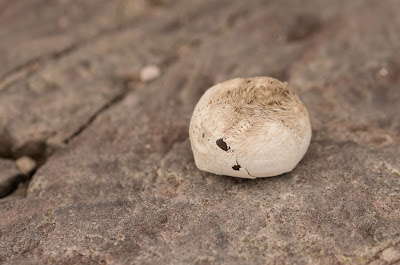 They are a generally quite a common urchin, but not regularly seen in the bay. They live in burrows under the sand and can be washed out by heavy seas. I think the heavy mud of the bay and the large tidal reach makes it unsuitable for them - I could be wrong (MD)

Finally, Janet managed to photograph the demise of the green marker post (4/08/20). I had presumed that it was just due to storm damage, and perhaps it was. 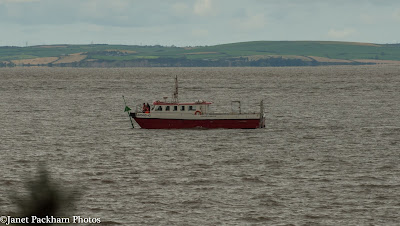 This is a salvage vessel removing the post. Perhaps it had been damaged and was being removed for repair. The supporting structure is still in place on the pipeline, I'll have a look at its condition during the next spring tides. You would think that they wouldn't go to the expense of removing it, if they weren't going to replace it. Let's hope so, as it's a handy marker for locating distant birds and feeding areas.