Heysham Obs
A reasonable number of seagulls on the outfalls and Red Nab including a 3CY Med in full summer plumage: 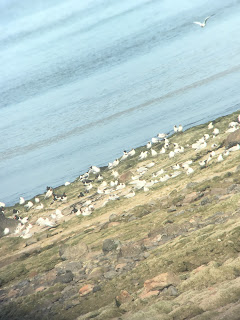 Moth traps at Middleton held both Silky and Obscure Wainscot and a rather late Shaded Pug graced the Heysham trap.

Any dragonfly info from today?

Ringing took place at Middleton NR this am and the surprise was a rather early dispersing juvenile Treecreeper - usually an occasional July feature and scarce and erratic at all times away from Heysham Head - and the first juv Reed Warbler.   Perhaps surprisingly, the few recent ringing efforts have not included any juvenile Cetti's Warbler, but the territories are mainly to the east of the ringing site
Posted by Pete Marsh at 19:21 No comments: