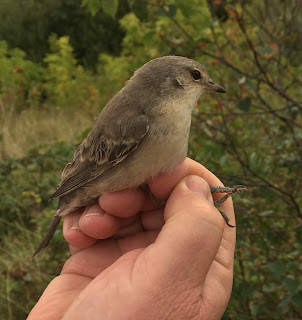 Typical of several Barred Warbler occurrences on the west coast. Apart from an early small flurry of Blackcap, there was very little evidence of grounded migrants.  Completely unexpected as nothing much doing with this species to the north of here, unlike the last Heysham record which followed Shetland 'crawling with them' in 1997. A long gap, even for the west coast, but our heavily vegetated recording area doesn't give a lot of chance to locate unless in a mist net and. as implied, they often don't turn up during obvious fall conditions.  Indeed, the pager messages suggest that this might be the only one in the country today!!

Pics later as no computers or internet in hey nature reserve ex-office which contains not a lot more than one plate, one fork, one tin of tuna and a kettle plus coffee

Vis mig over Middleton
Not a lot today with only half a dozen Meadow Pipit and about double that number of Swallow plus a single House Martin, plus 5 Grey Wagtail (three of them ringed)

Cabbage moth a bit of a mega in the trap!
Posted by Pete Marsh at 13:12 No comments:

7-8 meds and the ad little gull outfalls Thursday . 16 meds seaward end Heysham one on friday
Posted by Pete Marsh at 13:12 No comments: