The smell on the shore today from the remnants of the diesel spill was much fainter. It reminded me of entering an engineering workshop, at first you can smell the lubricants but after a few minutes you don't notice it.

Brent Geese - (MD). There were none on Red Nab as the tide covered it. I wasn't expecting any. But I was expecting a repeat of yesterday's showing in front of the children's play area on ebbing tide. I checked at 13:30 and again 14:30. Nothing! 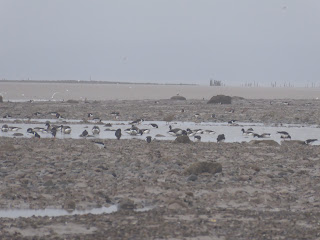 These are only a few of the 39 Brent on this central pool.

There were another 11 on the water near conger rock on south side. These were still visible when I reached the north side and found another 13 on the water. As I walked back the birds on the middle pool had split onto two pools one had 30 the other 14, so they had either been joined by 5 more birds, or I under counted on the way out.
So a total of 68 Brent geese. There could have been more as I was restricted as to where I walked so as not to disturb the ones I saw. At least 65 Pale-bellied, but these 3 on the left looked to be 2 adult and a juvenile Dark-bellied. 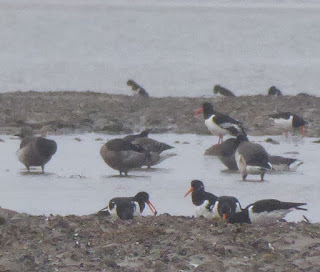 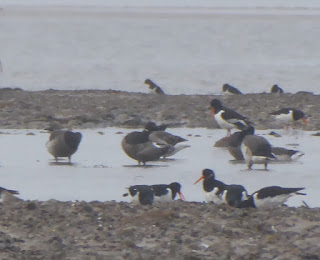 Hopefully more later
Posted by Pete Marsh at 21:25 No comments: