Almost calm first thing, the very light north breeze freshened slightly by the afternoon as it drifted to NW. largely overcast in the morning, but plenty of sunshine after lunch.

I saw 9 skeins from the skear totalling 542 between 09:00 - 10:30 (MD). Many of these will be in David's total, but at least three skeins were high to the west and probably well out of David's range. What was interesting today, is that although most of the skeins were high and heading due south, three were low and were adjusting direction as if searching for a local landing. One skein of 17 headed due east overland.

Report and pictures from Jean:

It seemed a quiet morning but in fact plenty of birds were moving quietly through and we caught and ringed 40 birds between 0700 and 1130 (see totals below). Moving through more noisily were flocks of Pink-footed Geese which came through from about 0730 to 1155hrs. Some were extremely high and almost all were heading due south, many were heard but not seen. There seemed to be a continuous stream between 1140 and 1155 but they weren't visible. In total, visible birds numbered 1410 but the 7 invisible flocks could well have brought the total to 1900. The geese seen over Middleton don't include flocks seen over the sea.

Ringing isn't just about catching and ringing birds, a lot of metrics are checked to ensure as much information as possible can be learned from the bird. Jean provides a couple of interesting examples here (MD)

Note how yellow this juvenile Grey Wagtail is suggesting it is a male. This was borne out by the wing length (87mm) - the average is 83mm and the maximum recorded is 89mm

This group were feeding, but one bird (mum?) looks to be on guard to keep the gulls at bay. One catches what looks like an eel, but is probably a Butterfish.

This Cormorant has caught a Flounder, but it is too large to fit down its gape so it discards it. I have seen them do this so many times, and it would seem so have the gulls! This Great Black-Backed calls for its youngster, who lands just in time to grab the fish. The Cormorant has a bit of a dig at it, but didn't really want the fish back.The youngster took its prize ashore. A fish this size is too large for them to swallow too, but they will work on it over two or three days (they will leave it further up the beach later for the crabs and shrimps to nibble on between low waters) until eventually it is narrow enough to swallow. My observations in the past suggest that the youngster will do all the pecking and get all the bits it can, but when the time comes it will likely be the adult that swallows the remaining carcass.

Wigeon flock of 23 seen from Whinnysty Lane by Kevin Singleton

On the waterline were many hundreds of waders including Bar-Tailed Godwit, Knot, Grey Plover and Dunlin most moved south, but the tide was lower today and came in more sedately so some just moved with it. These Grey Plover with a couple of Knot ended up just in front of the slipway.

It was time to leave, the tide here comes up behind you. As I headed back to the nearest crossing point towards the old Pontins, there was a feeding group of c20 Ringed Plover, 5 Dunlin and.....

Curlew Sandpiper 1 juvenile - they were not there when I walked out, so timing here is hit and miss. This clip pans out to show the location.

But the tide was making quickly and they soon left and flew towards Red Nab. I managed some nice diagnostic in flight shots 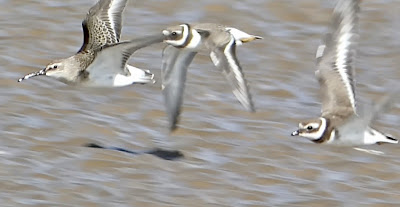 The delay meant that I had to walk up as far as the faux castle before I could cross the quickly filling creek. The risk here is of getting wet feet, not really dangerous. This flock of mainly Grey Plover and Knot were on the southern extent of the recording area, until a juvenile Peregrine Falcon lifted them. You can see it zip through the flock in this clip

When they weren't moving, the Dunlin and Sandpiper alike were resting with their bill hidden, it took a while before I realised that there was more than one. There were definitely two and I though possibly three. But checking my pictures I could only definitely see two. The only view I managed to get them both in, one had its head down.
Kevin Eaves checked Red Nab a little later, unfortunately by this time the tide was ebbing and the waders were resting. He did manage to locate both birds, but in 30 minutes failed to see a bill!
These tides are a good height, not too high to flush all the waders, but high enough to bring them close to the sea wall. About an hour before high water should be worth checking for the next few days.