Just my stuff so far, hopefully more to come, e.g. I've no Brent records, but I'm sure there would have been plenty near the play area. (MD)

South shore towards low water
Shelduck 30 on the mud out from foreshore
Pink-Footed goose 1 fresh corpse on Red Nab. It was partly eaten and obviously by a fox (they are a surprisingly neat feeder). PinkFoot do not routinely roost here so presumably a sick/injured bird or possibly a dead bird washed ashore. Red Nab is not covered by these neap tides. Although, the goose was partly eaten the fox will be back for more tonight. What was surprising, was that there were no scavengers (crows, gulls, rats etc) taking advantage of the corpse.
Rock Pipit 3 - 1 on sea wall plus two near the waterfall. This is the waterfall male bird striking a pose and calling. It was also making aerial displays.
This second calendar year Herring gull was in the harbour on Monday, it is another of the North West England gull project (see link on the side bar). We have now received its history. 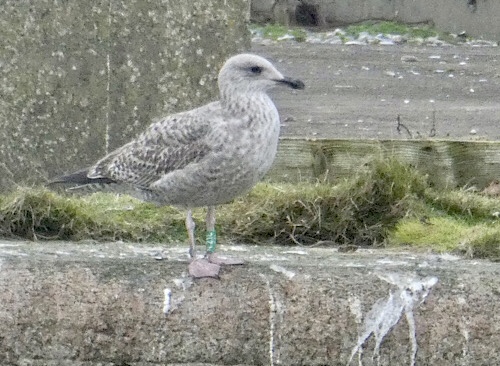 This is a good project being well managed, over 500 gulls ringed last year, so there will be plenty more to find. I like this graphic of the movement, shame that there is only one sighting so far. You will have to open this image to see the detail. 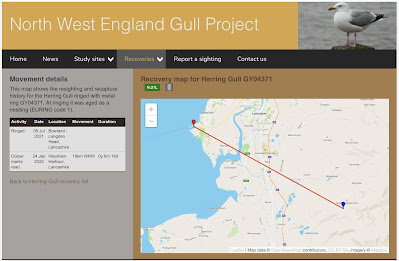 Middleton Nature Reserve
Just a quick look on the way home towards lunchtime. Landscape maintenance around the main pond meant that all the ducks, except the Mallard had moved to the "no swimming" pond.
Mute 7 adult plus 9 second calendar year birds
Moorhen 9
Coot 1
Mallard 15
Gadwall 43 (high count for this winter)
Wigeon 2 (pair)
Tufted Duck 1 male
Shoveler 3 (mature male plus two female)
Teal 3
Little grebe 1 - moving back to summer plumage.
I was just returning to my car when a....
Green Woodpecker 1 flew past to the west past the low car park.
It was a nice evening so I couldn't resist another look at the Jackdaw roost. At 16:30 there were c100 milling around, but the local Carrion Crows have decided that they don't want them resting on the pylons, so the Jackdaw were constantly moved on. By 17:15 (still some light left!) there were over 200 looking for a safe roost, and again heading to the east side of Middleton Rd. This is the largest of three groups at that time - it was much darker than this picture suggests.
Posted by Pete Marsh at 20:41 No comments: