Nothing new, but something old.....well, elderly 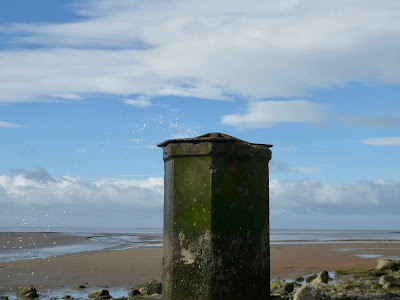 This is an indication of the amount of rainfall last night. The pressure of the draining ground water created a fountain from the Ocean Edge ground water drain terminal.
Again only my records so far (MD). Heysham Nature Reserve and saltmarsh covered. No warblers or Goldcrest seen or heard.
There was an increase in finches (mainly Greenfinch plus some Chaffinch) grounded on Heysham Nature Reserve and a few Blackbirds. The Blackbirds feeding on hawthorn.
Jean provided these interesting details from recent ringing sessions:

A Blue Tit retrapped on 8 Oct on Middleton, was first ringed at Middleton NR as a juv on 8/9/2014, (6 years 1 month from ringing date) so a good age for a Blue Tit, as the average age of a Blue Tit is 3 years. The oldest ever recorded was 9 years 8 months so ours still has a way to go.

It was retrapped in October 2015 then in May 2016 and we hadn't seen it since then until Thursday. It hasn't been retrapped at Heysham NR so who knows where it was in the meantime, maybe the golf course or the dog walk track.

Another Blue Tit caught on the same day was ringed as a juv on 31/8/2018 at Middleton NR but hadn't been seen since.

An oddity on Thursday was a Wren with a crossed bill. It was a young bird so I hope we catch it again and see how long it survives with that deformity.

Another oddity was a young Blue Tit with fault bars across its primary coverts. These show as paler lines as the feathers lack barbules in that area and consequently are weaker than the surrounding portions of the feathers. Fault bars like this form when nestling food is in short supply while the feathers are growing eg during bad weather when the adult birds can't find enough food for the young for a day or two.