Pretty much everything, except sunshine, in today's weather. It started out frosty in the night, but had turned to rain by morning, which eased to light showers later. Temperatures hovered around zero leaving some very slippy black ice. Later in the afternoon there were a couple of snow showers. The wind continues from NNE.

Pete had to be in the area this morning, so took the opportunity for a spot of, as it turned out, timely sea watching:
Iceland Gull. 1 juvenile out from harbour mouth, very distant to the west of the Kent channel. It was a small very attenuated juvenile with lightweight flight - no chance of confusion with Glaucous gull despite the range. Initially, probably just over Lancashire waters, but soon well into Cumbria.
This is the first Iceland Gull record for the recording area since 25/05/18.
Mediterranean gull -  1 adult attending feeding concentration along A589 north of Oxcliffe lights but didn’t land on roadside lamp post this time. Technically just out of the actual recording area, but an area of easy access for any local readers.
Pale-bellied Brent goose 31/32 feeding in the skeer corner 11:20
Middleton Nature Reserve
No swimming pond
Mute 2 adult 3 + 1 juvenile
Coot 4
Moorhen 2
Little Grebe 1
Gadwall 27
Mallard 6
Grey Heron 1
This Heron was at the open water's edge. Not quite as hopeless a strategy as it looks. The amount of food that is thrown in here acts an effective ground bait, attracting any omnivorous fish in the pond. Unfortunately for the Heron, as far as I know, there are only Perch in this pond which are primarily carnivore, but perhaps there are Roach or Rudd in this pond as well.
I'm not sure if this young Black-Headed gull is soiled or oiled. The number of oiled birds in and around the bay have reduced significantly over the last 20 years. Hopefully this is just some grime from one of the trampled puddles on the reserve. 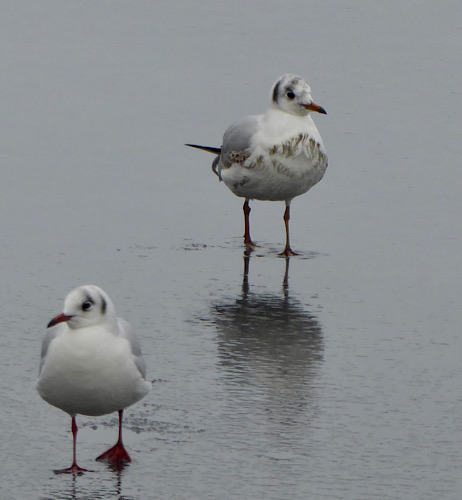