All quiet ahead of the western front 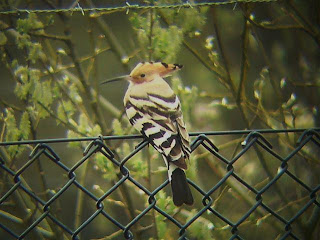 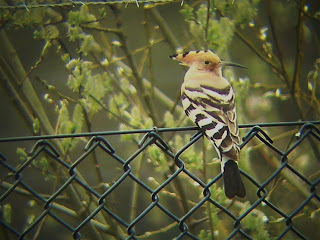 Here are a couple of phone/scope pics taken by Mike Stocker yesterday when the bird visited the fences next to the nature reserve office. Thanks Mike.  It actually visited 3 10km squares, such is the configuration of these at Heysham!

Been a bit hit and miss for seawatching so far, but Sunday morning coming looks interesting for a bit of skua passage - keep an eye on Saturday if the weather system comes through a bit early.  Otherwise a couple of fairly useless looking north-westerly days coming up, followed by some calmish ringing/vis/a few seabirds (or getting on with early morning upland survey work!) weather on Thursday/Friday.  Saturday might be a passerine fall/useless strengthening southerlies/possible seawatching weather depending on timing
Heysham Obs to 0900hrs
A line of rain out to the west stayed there forming a barrier across the bay and seemingly knocking most things on the head prior to 0900hrs.  No Wheatears in coastal check of Ocean Edge & north wall area.  Rain came in at 0910

Webs early pm
Purple Sandpiper - definitely just the one left at the moment
Turnstone - 176
the rest stunningly undramatic apart from a female Mallard on Red Nab!

Marsh harrier
Some obtuse stuff on a local website which seems to indicate a female passed by over the sea mid-afternoon, but it may have been further to the north.  Presumably missed it travelling between sites on the Stone Jetty-Heysham WeBS