Possibilities and a new moth for Heysham NR trap

Middleton model boat pond
A quick visit just before the cloud and northerly wind kicked in saw a large dragonfly seen briefly chased by an Emperor.  Then it was again seen very briefly before being chased by another Emperor and heading high to the south over the model boat pond car park.  If the weather is suitable tomorrow worth checking the pond to the south of the road as a blue band at the top of the abdomen was seen and size 3/4-4/5 Emperor - also clear-winged (not Brown Hawker).  Nothing else, so nothing claimed.

Three male Red-veined Darter were feeding over the water, one rather geriatric one nearly ending up inside a House Martin - also at least 7 red male Common Darter around the edge of the pond 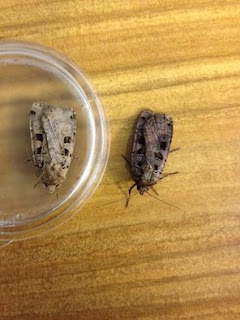 Juvenile sedge warbler out of habitat on Heysham NR
Posted by Pete Marsh at 00:02 No comments: