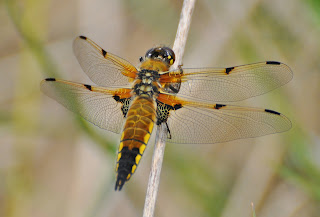 A very early 4-spotted Chaser at Middleton this morning (thanks Janet)
Heysham Obs
At lunchtime, Janet indicated that she had just photographed a large dragonfly at Middleton!  "Unfortunately" this turned out to be by far the earliest ever record of 4-spotted Chaser for this area, not the hoped for Hairy Hawker or 'ridiculous' Vagrant Emperor long-shot.  Pic later.  Good coverage this morning by Pete Cook, John & Nick from 0600 to about 0945hrs.  Decent numbers of Arctic Tern with many on a close-inshore line, but others a long way out and some may have been missed along this line.  An accompaniment of four Arctic Skua was par for the course

Elsewhere
No terns visible from JBP pre-0930 but two different (on timing) dark morph Arctic Skua passing through together (up the Kent estuary).  After seawatching had ceased at Heysham, there was a trickle of Arctic Tern (c30) and an influx of Arctic Skua with a further 7 individuals (3 light morph) giving a total of 9 for the morning
Posted by Pete Marsh at 10:04 No comments: