Mainly WSW wind shifting to due west by evening. Quite a fresh wind early on accompanied with low cloud and steady rain.
Pete's "seawatch" was hampered by not being able to see much of the sea through the murk, but still managed:
Gannet 8
Manx Shearwater 1
Unfortunately, time was restricted as it was clearing slightly as he was leaving.
Kevin Singleton was pleasantly surprised by two Fulmer heading out at 11:15  - seen from Whinnysty Lane
South Shore around high tide 09:20 (MD)
Wheatear 2 along Ocean Edge Foreshore
Linnet 3 saltmarsh/foreshore plus 2 near lighthouse
Rock Pipit 1 on Red Nab and female feeding lighthouse young in nest
I tried my hand at seawatching, but neither my optics or patience are really up to it. Not too bad sheltering in the lee of the lighthouse, but little moving within my range. 10:00 - 10:30
Manx Shearwater 3
Gannet 2 out. 1 adult and this immature bird - sorry about poor definition but it was raining quite hard at this point.
On my way back down the sea wall I spotted a Guillemot being pushed towards Red Nab rocks by the waves. I managed to get my camera out just in time to see the last wave push it onto Red Nab.
Fortunately it was stronger than it looked and fought its way back through the waves and headed clear of the rocks.
Its wings seemed fine, but obviously not keen to use them to fly, presumably already exhausted.
Heysham skear - low water 16:25 (MD)
By this time the wind had eased and there were sunny spells
Eider 36
Great Crested Grebe 1
Apart from the Oystercatchers there were only two other waders, fortunately both provided good views.
Dunlin in summer plumage. (I'll leave determining the subspecies to the more experienced (MD)) 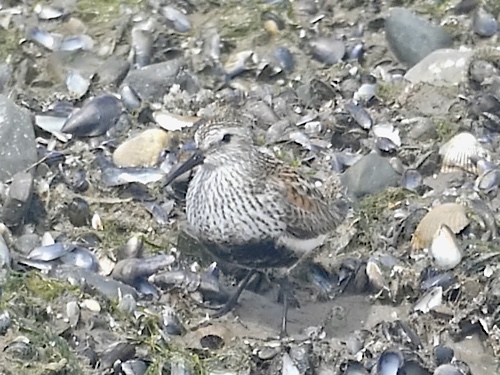 Sanderling
The Sanderling managed to catch a shrimp, (the strong SW winds over the last couple of days have coloured the water sufficiently for more shrimps to venture close inshore). It seems to be as large a snack as it can manage, but manage it did.
Posted by Pete Marsh at 20:44 No comments: