Something resembling the cutting edge at last after being distracted by moth traps.  Setting off for Heysham in zero visibility and driving rain was all based on the rain alarm, suggesting some breaks after about 0745 and just about enough tide left to justify a visit.  An arrival at 0750 was only just in time!

Sea 0750-0920
Pomarine Skua - three light morph adults, one seemed to have a 'broken spoon' or may not have been a full adult, headed in quite close inshore at 0758hrs.  These skuas appeared as the first short-lived clear slot appeared
Arctic Skua - at the same time as the above, two more distant skuas needed identification and they transpired to be a dark and light morph Arctic.
Gannet - 5 out
Manx Shearwater - two out in the gloom
Sandwich tern - one in
Shag - a near adult flew out very close as the tide was dropping.  The same routine as the long-stayer but that hasn't been seen for ages.  A puzzle, no doubt resolved by any further sightings or otherwise


Harbour area 14:00
Both Rock pipits are taking loads of food to nest near lighthouse. 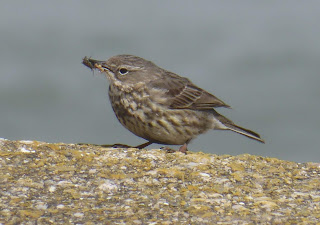 This bird with the more pronounced supercilium is presumed to be the female, as this was the one that collected the nesting material (MD)
N.B. They will not fly to nest entrance if they see anyone in the vicinity of nest. Best viewed at least 30m past steps towards waterfall, then look back towards lighthouse.

Guillemot still by waterfall, no sign of Shag.
Posted by Pete Marsh at 10:05 No comments: