Another heavy overnight frost. The wind more to NE, but still cold. But the day was again pleasant to walk in, with the warming sun shining for most of the day.

Middleton Nature Reserve
Again plenty of gulls on the main pond ice, but none ringed. We have just received the details of a Black-Headed gull read on the ice earlier this winter:
Black-headed gull K03025/J1TH
This is the second consecutive winter that it has been recorded at Middleton

The small hole on the "no swimming" pond is now frozen over, there were just 4 coot and 2 Moorhen walking around the margins.
But, surprisingly, there is still a small hole on the Tim Butler pond, maintained by 25 Gadwall 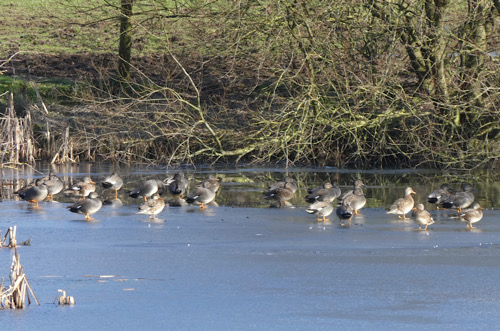 Again the tide was not high enough to cover the marsh, but it still flushed:
Common Snipe c20
Jack Snipe 1 flushed by tide plus 1 flushed by me around the edge where groundwater was seeping onto the marsh
Reed Bunting 1, but different to yesterday's bird.
A quick scan of the skeer towards low water found no Brent geese
Goldeneye 1 male
Posted by Pete Marsh at 20:12 No comments: