48 Pale-bellied Brent Geese close to the promenade off the play area between Whinnysty Lane and Knowlys Road (including the Canadian colour-ringed pair VD and VT) at 9.50 am

1 adult Mediterranean Gull on the beach, then flew off towards Whinnysty Lane

Sandylands Promenade, Morecambe – Black Redstart on gutter by ‘blue house’ at 10.15 am but flew off over roof tops, possibly due to the presence of a Robin

Heysham skear (MD)
Eider c80
Great Crested grebe 2
Red-breasted Merganser 2
Knot c1000
The main waders were, as ever, Oystercatcher, but also a few each Redshank, Curlew, Turnstone and Dunlin
Little Egret 2
Shag 1 - feeding out from the skear, meanwhile Pete advises that 2 were seen in the harbour c10:00. The implication being that the bird on the skear was a third bird.
Imperial Road - from the bypass to the recycling centre.
Common Buzzard 1
Kestrel 1
Little Egret 2
Greylag Geese 50 - they came from the east, did a circle over the west side of Imperial Rd, so within the recording area, before settling to feed on the east side. At that point outside of the recording area, but still visible from it. This is them passing over the eastern boundary of the recoding area and landing just beyond it.
This is where they ended up, just to the east of the "Waste Technology Park".
They are getting ready to replace the blades on the wind turbines to the east of Imperial Rd. 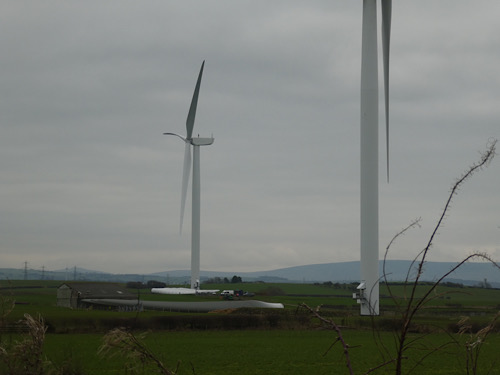 It is my understanding that these units are not just used to generate electricity, but also serve as crew training units (much "safer" than offshore). And also test units, so perhaps the exercise is to try a new design of blade, or perhaps just to train the crews. Either way, I was glad that I was stood on the ground. Can you see the chap stood on top of the further one?
This is zoomed in. You can't see it on this shot, but he was attached to a safety harness, even so he was obviously very comfortable up there. It turned my legs to jelly just looking at him (MD) 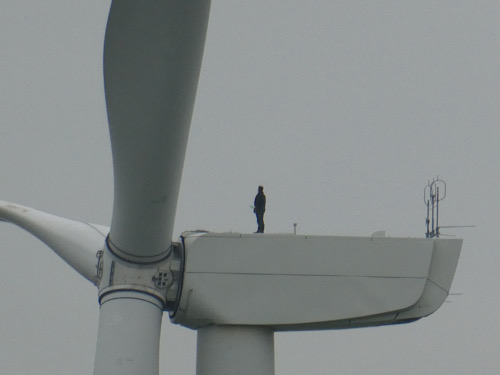