Pleasant seawatching conditions today with a light north-easterly, calmish seas and a background of cloud resulting in the following being seen from the harbour and later from Half Moon Bay:

Black Guillemot - 1 whizzed out past the wooden jetty at about 1010h
Common Scoter - many milling about near the turbines then they all took off and headed NW as the sky cleared. Minimum of 600.
Arctic Skua - 2+ 2 (see phonescoped photos below - Thanks to Chris Vaghela) These appeared nearer to high tide.
Arctic Tern - 64 in, 1 out
Sandwich Tern - 18 in, 1 out
Swallow - 4. Worryingly low numbers this year.
Red-breasted Merganser - 1 in
Grey Seal -4 floated in

Harbour
The Guillemot was still floating about.
Rock Pipit(s) busy feeding young in the nest.

Now for the stars of today’s show as they progressed along the Bay: 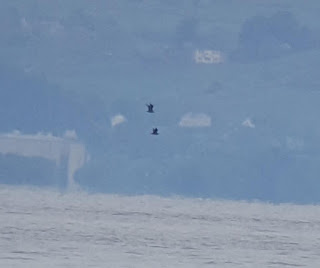 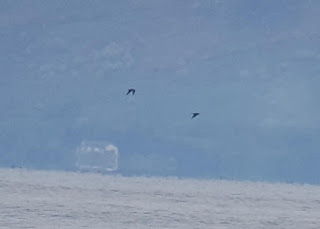 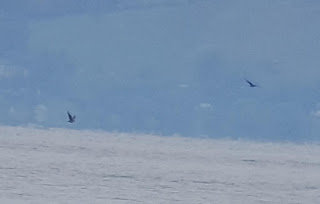