Early morning sea-watching was left to Nick at the Stone Jetty and, not for the first time, the single skua record in a south-easterly was a couple of Poms.  Then Jean had a very close encounter with an in-off adult Hobby which whizzed past very close at 'eye level' on Heysham Head - a really decent bird here which is barely annual

Remember the continental-looking Robin already bearing a British ring?  Not far wrong with the Fair Isle guess!  Note what is presumably a very held-up migration (from southern Europe?) this year in the poor weather 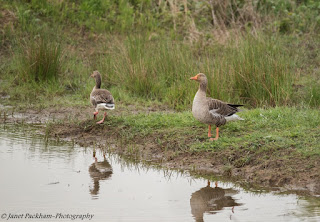