Insect day, but not as insectity as it could have been.

Light wind starting from east but moving to west by mid morning, then back east by evening. Mainly sunny during the day, but overcast by late evening. 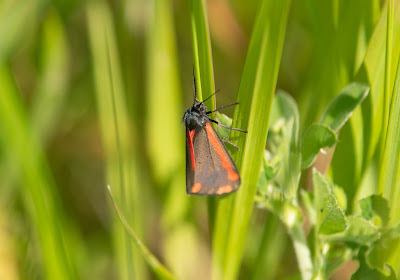 South shore (MD)
Rock Pipits minimum 7. I checked twice, in the morning there was one on Red Nab plus Two along the sea wall. There were at least 4 around the lighthouse area, but there were several visitors walking around, so it wasn't really possible to sort them out.
In the evening I didn't see any on Red Nab, but they were everywhere from No.1 outflow, around the roundhead and as far as the waterfall (taking advantage of the gut of insects coming in off).
There were four feeding on the sloping wall near the lighthouse with the male standing guard. I took the four to be the female, two young birds and the long staying lame bird. This is the male standing guard.
The young birds were feeding themselves, as it was easy pickings, but they took a rest. These are the two that I thought were the young ones (MD). If they are both young, they must both be from the lighthouse nest, I can't see the male tolerating one from another brood.
There was an adult with a young bird on the sea wall between No.1 outflow and the roundhead. There was also an adult with a young bird between lighthouse and waterfall, but I couldn't rule out them being the same two, or even if they were two from the roundhead sloping wall. But I didn't think so.
This is the adult along the inner harbour wall, it looks stressed, presumably as it didn't know where the young bird was. It flies off as soon as it hears it.
So, at least 5 birds around the roundhead, probably 7, possibly 9.
There are four local factors that attract insects in off the sea at the roundhead:
temperature - it was warm enough today.
time of day - they need time to arrive from wherever they are coming from
wind direction - ideally an east wind or at least a wind with some east in it
tide - if the above three conditions are met insects will be drawn in off the sea, but if the tide is in, they can come in anywhere. When the tide is out, the roundhead is the only point where they can come in directly from the sea onto land.
Today was a frustrating mixture of mistimed factors!
The wind was from the east early morning, so I had a look at 10:30 to give any insects time to arrive. Unfortunately the wind swung towards the west just as I arrived, but there had been some movement and I just caught the end of of it.
Painted Lady plus Common Blue butterfly on Red Nab.
Another Painted Lady, 7 Common Blue and 2 "small" whites heading inland from the roundhead.
The wind was forecast to shift back to the east by mid afternoon, but it stubbornly refused to move! I went back at 18:00, the tide was in and the wind still from the west, albeit a light wind. It started to shift to the north, then NE at 18:15, when a trickle of butterflies started coming in off (there were probably lots more but stretched all along the wall as the tide was in).
Painted Lady 4
Also seen on scrub near lighthouse
Common Blue 2
Silver Y moth 2 - this one feeding on sea campion
Although there were only a few butterflies and no dragonflies seen. There was all sorts of insects coming in, mainly small flies/beetles - hence the focused Rock Pipits. This Crane fly came in off and rested briefly on the sea wall. I think it is a Tiger Crane Fly (MD). The reference books say it's a common species. It's only the second one I've ever seen so they can't be that common locally. 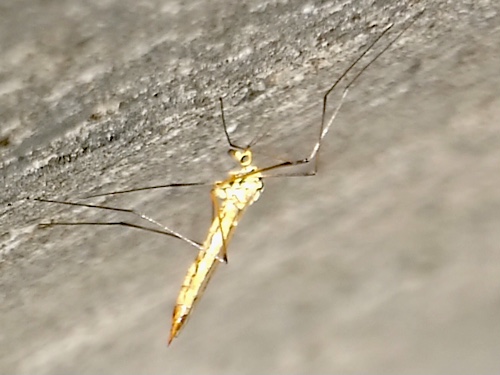