Funny morning. Middleton NR CES saw a Crossbill, 11 Tree Pipit and two Yellow Wagtail south by 0645hrs but deadly silent as regards grounded birds or lingering local summer visitors. Then the vis ceased apart from a few hirundines and two early Meadow Pipit and there was an hour of absolute zero activity. Then a trickle of grounded migrants from about 0830 to 1000 including a bit of local quality in the form of three Whinchat together and a Pied Flycatcher
The other significant feature this morning was a complete absence of Willow Warblers within earshot at either Middleton or Heysham
The Ad Bonaparte's Gull was on Heysham one outfall just after lunchtime along with 3CY Little Gull

Middleton NR vis 0530-1015
Tree Pipit - 11 south-east, all before 0645hrs and including groups of 5 and 3
Flava wagtail - two south-east
Crossbill (spp?!) south at about 0635hrs - too high to see details
Swallow - difficult to work out whether there was any passage
House Martin - at least 20 presumed migrants

Heysham NR
A trickle of warbler species and one Tree Pipit 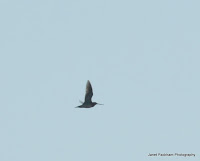