Nothing "new" to report

Nets set from 07.00 to 10.30 but just three birds caught - a Blackbird, Robin and retrap Cetti's Warbler! (One sining later on)

One of the drawbacks when using mist nets is that wandering round the rest of the reserve is not possible so it's hard to know what was around elsewhere.  Only a handful of blackbirds and thrushes were seen.

After my recent post regarding the lost medieval trees on the skeer, John Dent reminded me of the other lost trees on the foreshore. These emerge then erode from the rocks below Heysham Head. 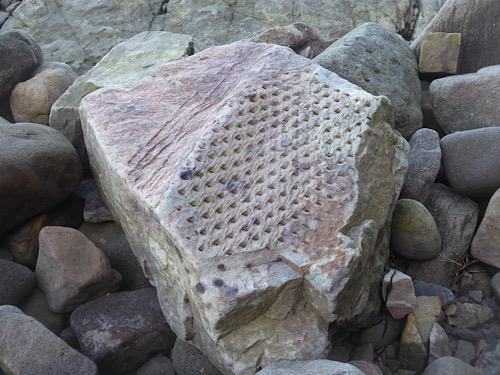 The piece is about 0.5m long, but the previous year it was at least 1m and 20 years ago it was still in the strata and at least 1.5m long.

It's not strictly a fossil, but the external mould, of what I have always thought of as a "Tree Fern", but John has been advised that it is a lepidodendron which is related to  club mosses. I have looked this up and it definitely fits the bill. I knew the rocks were Carboniferous, but this species narrows the date range to 300 to 350 million years ago.

I love standing on this strata, each layer is the mud surface exactly as it was 300 million years ago, in exactly the same location. But not a muddy beach then, presumably a lake bottom. And, same location is only relative, tectonic movement means that we would have been on a completely different part of the globe. 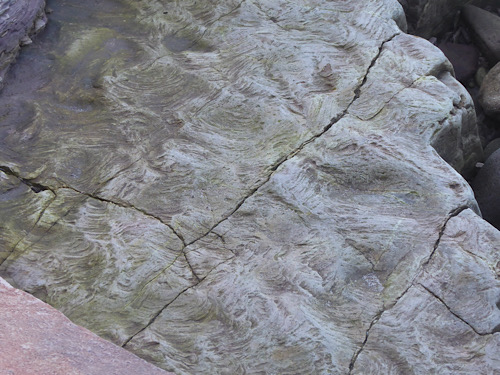 After John reminded me, I went to have another look at the "fossil", but couldn't find it.  John managed to relocate it and took this shot. 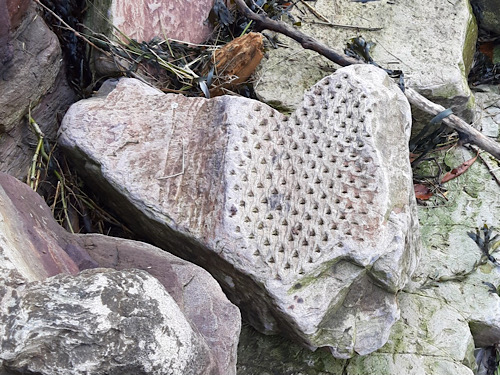 It is even smaller and more eroded now. Because it is lighter it is more susceptible to storm damage, and I doubt it will last many more years. Of course others may emerge in time, but they're not in a rush!

If you decide to take a look, there are two things you must consider.

Perhaps, on another quiet day, I'll show you how to find the "Heysham Labyrinth" (google it). You'll be totally underwhelmed if you actually see it!