Ringing this morning saw five Lesser Redpoll and five warblers (three CC, WW & BC) as the conditions were clearer than yesterday and the wind fractionally more east with very little south in it.  The current synopsis is on a nightly knife-edge between blocking and producing the goods, with things like cloud cover and offshore visibility as well as how much north in the easterly being key factors as well as what's going on down south, including over France

Rose sent me the Ed Keeble method as applied to the heliport roost a couple of days ago and her estimate fits very well with the easier counts of birds spread over the feeding areas off Heysham Head.  Thanks for this. 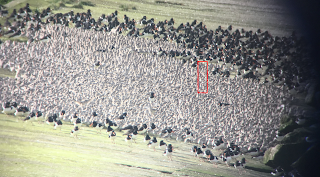 
Caveats: 1) knot appear larger on the left and bottom, and smaller on the right and top, so box size might be incorrect, 2) relies that all the knot can be observed in the red box e.g. none hidden.