Just a reminder:  STRICTLY NO PHOTOGRAPHY THROUGH THE POWER STATION FENCES

All photography around the harbour, which is continuously monitored on camera by either the harbour or power station security cameras (I was watched for over an hour today by both harbour and power station cameras plus the mobile patrol as I was seeing what the Iceland Gull was doing!) must involve cameras being pointed away from the EDF Power Station land e.g. quite ok pointing down at the harbour waterfall for anything feeding there or pretty pics of incoming ferries!

Attempts to read ring/flag numbers on Knot were just about to be successful when a 'large fat dog' ran/waddled down on to the near naze and plonked itself there sending all the Knot to Middleton.  Ring reading can be very frustrating eg garish lycra-clad cyclists along the Sunderland point road just as you are trying to clinch the details:-)

Iceland Gull - 3rd winter on the waterfall/harbour wall/platforms trying to chase every other gull off for most of the morning.  Some pics from Janice Sutton this am - thanks Janice: 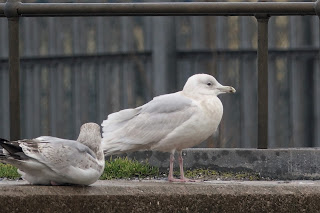 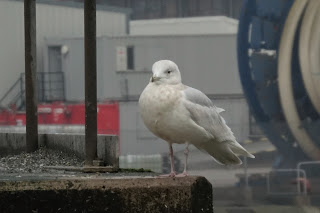 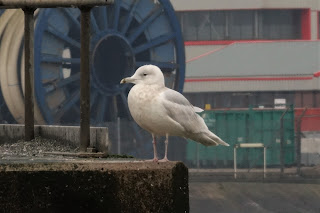 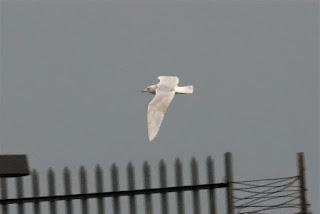