Heysham Obs
Not a lot on a dropping tide check of outfalls but a later check of the wooden jetty area and Heysham one outfall by Phil saw a gathering of Med Gulls in the usual place between Heysham one and the wooden jetty and also a return of the two Little Gulls ...but no terns and the 2CY Kittiwake may have succumbed after yesterdays health check.  Later on there were 15 x adult, 6 x 3CY and one x 2CY meds! The toilet moth trap was surprisingly good, including the inexplicably scarce Elephant Hawk-moth! 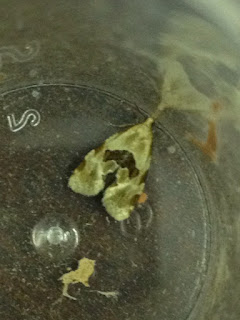