This morning I checked out the most likely nesting areas in the vicinity of the displaying Rock pipit seen on saltmarsh on  June 14th. Not a sign.
I then walked along south wall to check for Mediterranean gulls, again nothing.
To my knowledge, there hasn't been a Rock pipit seen in harbour/outflows area since June 10th, despite almost daily visits. I had been at No1 outflow a few minutes, when two Rock pipits appeared, one begging for, and receiving food. I had just put my camera away and just managed to get it out in time for a hurried shot. Think it was the far bird begging. After that they flew into Power Station land near the reed bed, presumably where they had come from. 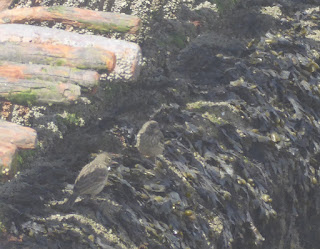 I suspect that the two "spare" birds, seen occasionally when the known breeding pair were feeding young, must have nested later, probably within the PS grounds. I really don't think any of the well watched pair's young survived. (MD) 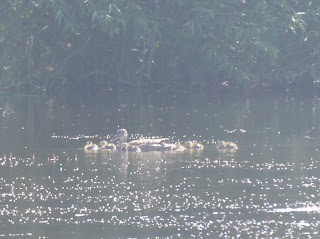 Pete and Jean not back till late today. Hopefully back to normal tomorrow.
Posted by Pete Marsh at 18:00 No comments: