Still some goldfish, plus mixed bathing at Heysham!

The breeze started NE before moving back to the west. Plenty of cloud cover in the morning but more sunshine after lunch.

South shore - 4 hours before high water.
Rock Pipits 4 - 1 on foreshore, 2 on Red Nab, 1 near lighthouse. No sign of the ringed male.
Willow Warbler 1 near lighthouse
Linnet 29 - 9 on saltmarsh, 6 around Red Nab, originally 4 near lighthouse, but this quickly grew to 14.
There were thousands of tiny flies around the scrub near the lighthouse, presumably home grown, they seemed too small to have flown far. The Pied wagtails were taking advantage and were quickly joined by growing numbers of Linnet.
Great White Egret 1 north past the end of the wooden jetty 09:20.
Mediterranean gull 7 - 6 adult plus 1 3rd calendar year feeding on beach next to wooden jetty. No ringed birds seen today.
Grey Seal 1
This is the pond behind Red Nab again. It is common in this area to see mixed tit feeding flocks, but today it was mixed bathing. Coal, Blue and Long-Tailed tits.
This Migrant Hawker was also near the pond. This is the first record this year. 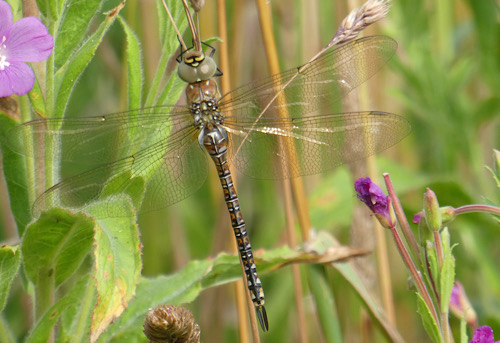 Heysham Nature Reserve
Purple Hairstreak butterfly  - I'm hearing reports of a sighting, but not sure yet by whom. But the likely area is the few Oak trees on the northern edge of the central plateau.
Middleton Nature Reserve
Just a very quick, fruitless, check for Red-Veined Darter. But did spot the resident Grey Heron catch a goldfish/Rudd or Roach hybrid. I mentioned a while ago that the numbers of these fish had declined to a point were the cormorants have stopped feeding here, but obviously still enough for the stealth of the Heron to catch them.
This is a decent sized prize and the heron took no chances with it. It took it on to dry land before manoeuvring it to eat.
Some moths from Pete's Middleton moth trap last night.