Invasion - one day after D-Day!

D-Day stands for Diesel disaster day.
Yesterday, a major spillage of diesel covered the sea out from the north wall and Half Moon Bay. The beaches were (and still are) closed, but the stench of diesel was enough to keep the public at bay. Diesel has a very low viscosity which means it quickly spreads out over a very large area, which is a bad thing. Fortunately, this allows it to evaporate quickly, which is not such a bad thing.
Today the stench was reduced to an unpleasant smell, and there was no obvious visible signs of the diesel itself or any obvious damage. That said, it will be a relief when the Shag is sighted again (MD).

The "Invasion" refers to an influx of Pale-bellied Brent goose -
12:20 - 46 landed in front of the children's play area just as the ebbing tide was at the rock edges. They then quickly moved into the margins and started feeding. 46 is certainly the highest count this winter, if not ever here. 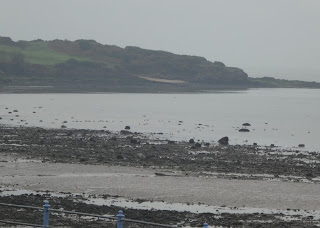 All 46 are on this picture, taken from 4 Lane Ends, but you'll have to "open in a new tab" the image if you want to try and find them all.

Later there were at least 28 feeding in the SE corner of skeer. There could easily have been more as they can be difficult to spot when feeding amongst the rocks.

Rock Pipits 2 enduring the fumes at Half Moon Bay