The west breeze continues but with a bit of south in it. Some clouds but mainly sunny.

Heysham Nature Reserve
Purple Hairstreak - last year there were a couple of "probable" sightings, and there have been some unconfirmed repots this year, but yesterday Linda and Barbara had a definite sighting at 17:00. This is the most likely time of day, check out the oak trees on the northern side of the plateau.
Middleton Nature Reserve (Janet)
Good numbers of butterflies here too. Including this Painted Lady
These droppings were amongst the rocks by the main pond, Janet wasn't sure, and I can't be certain, but they do look like Otter spraints (MD).
South shore
Wheatear 1 on Ocean Edge foreshore
Rock Pipit 1 on Red Nab
Mediterranean gulls 5 adult/3cy on the beach next to the wooden jetty.
Insects:
It was hot, the tide was out, ideal conditions for insects coming in off the sea near the lighthouse, if the breeze had been from the east. But the breeze was from the west. When you have a theory of insect movement based on wind direction, it is important to check both predictions. Today there should have been nothing coming in off, and that's exactly what I saw. The only butterflies were a couple of resident Common Blue.
But there was plenty of butterfly movements inshore. The Buddleia near the newt pond was again very busy, but the butterflies did seem to be moving through, particularly the Large White.
All the butterflies seen yesterday were present again, plus:
Painted Lady 1
Brimstone 3 (all males)
But most of the feeding was on the Buddleia. The light reflecting off the surrounding foliage made the wings look pale green, showing their excellent camouflage effect, as a leaf.
At least 7 Large White passed quickly through in the 10 minutes I was watching. Once again, they were reluctant to rest with open wings (not good camouflage). This was as close as I got.
It was clear that a number of the butterflies were moving through, but it wasn't obvious which way, so I had a walk along the foreshore and saltmarsh to see if anything was coming in off.
There was a small group of, probably resident Green-Veined White near Red Nab, but nothing moving either way, there or along the foreshore. But there were plenty of butterflies around the saltmarsh:
Large White 5+
Peacock 1
Small White 7+
Small Tortoiseshell 4
They were feeding, but also gradually moving south as they did so. So presumably the general movement was south, probably along the coast line. This does fit with the element of south in the breeze at this time. (MD)
Finally a bit of news on the one legged Little Egret (see post 2/08/21) Kevin spotted it resting on Red Nab. It wasn't stained today, and Kevin's shot shows that the leg is severed just above the foot, and if it is the result of an accident, as opposed to a deformity, it has healed well (pun not intended, but it is a good one!). Red Nab would not be a good place for it to feed, as the technique here is generally to disturb the mud with one foot while standing on the other. But it will be fine in the ebbing drains around the skear, where they just have to stand and wait for the prey to swim past them. Hopefully I'll see it feeding one day when I'm down there. 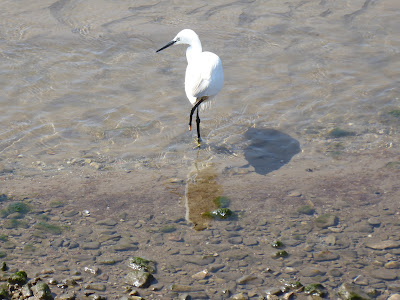