Fresh SSW wind. Overnight rain stopped early on with just one heavy shower after lunch, otherwise high cloud with some sunshine.
Red Nab - saltmarsh area - high water 10:30
Pale Bellied Brent Geese 9 feeding on the Red Nab gut weed till displaced by the rising tide, then flew towards the Lune estuary.
Wigeon 160 out from the saltmarsh
Rock Pipit 3 (1 on Red Nab plus 2 together on saltmarsh)
The tide had already covered the marsh so most of the Common Snipe were already long gone but:
Common Snipe 2
Jack Snipe 2 - both the Jack Snipe provided good views, but very difficult to photograph in flight, particularly against the light. Fortunately they have a unique profile. These are my best efforts (MD). 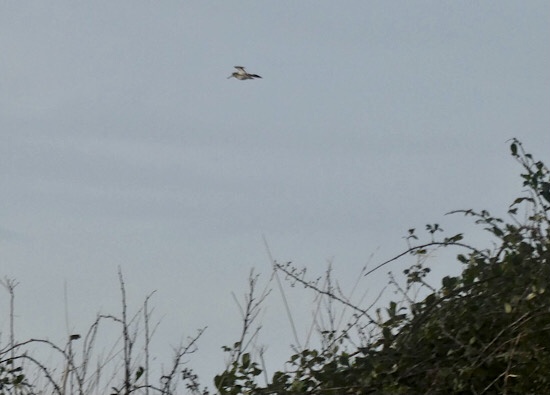 Middleton Nature Reserve
Just the passing five minute check
Mute Swan - I thought the aggressive male had returned to the main pond to usurp the four new adult, as there were five adult plus seven cygnets on the main pond, and one adult was chasing adult and juvenile alike. But on checking the "no swimming " pond the original two adult were still there with the other two cygnet.
Mallard 18 on the main pond
The remainder of today's "ducks" were all on the "no swimming" pond. This is where today's "boys club" comment comes from, with the exception of the Gadwall, all today's ducks were actually drakes!
Gadwall 36 (roughly half female and half male)
Tufted Duck 6 male
Shoveler 1 male
Pochard 1 male
Teal 1 male
Coot 1
Moorhen 5
This clip includes all six Tufted
North shore
Just a quick look from Knowlys Road
Pale-bellied Brent Geese 19 out from the children's play area mid afternoon. The early afternoon downpour would have done them a favour by deterring walkers. It was still quite quiet when I checked (compared to yesterday).
Also, seen by Shaun:
Mediterranean gull 1 adult near play area
Barnacle goose 1 with a small flock of Pink-Footed geese over Heysham Village bay
Harbour waterfall
Another quick check from Fishers side
Shag 1 juvenile
I've been thinking about what I said the other day about the waterfall being more suitable for the diving birds when the tide is above its outlet. The logic of that is because the gulls can't reach any fish, there are more for the diving birds. But when I watched today with the water level significantly below the outlet, it occurred to me that any fish dropping that height will likely be stunned, so easier to catch, for both the gulls and the diving birds. Either way, I've seen Shag feeding here in both scenarios, although, not when the tide is significantly higher than the outlet (MD)
I took the clip below to demonstrate the process, more than capture the detail of the Shag. It is only poor quality anyway, as the low late afternoon sun was shining from behind. The still below is from the clip and shows the location of the juvenile Shag as it makes a brief appearance towards the end of the clip.
Just a word of caution about checking from this side. The waterfall is visible, but only in you stand close to the edge of the harbour wall. Recommend only if you are sure of foot, and a good swimmer!
Finally - just in - Kevin Singleton managed a quick visit to the area today and provided these nice high resolution images: 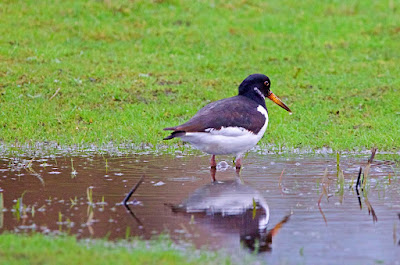